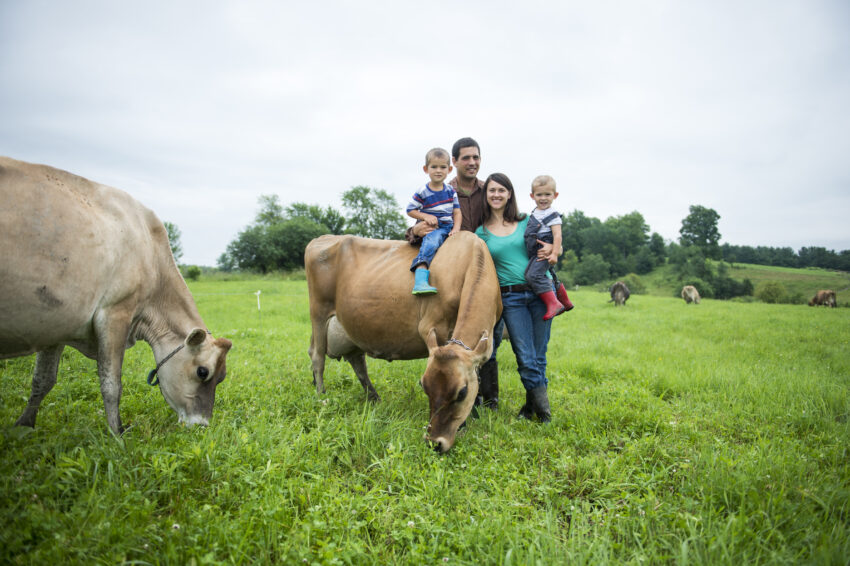 On March 1, dairy farm and grocer Family Cow Farmstand closed its doors after 13 years of providing raw milk to Hinesburg. Now, another farm has stepped in to take its place.

Emily and Joe Donegan have been farming in the area for the past fifteen years. Located on the border between Hinesburg and Charlotte, the Donegan Family Farm has produced milk for the farmer’s cooperative Organic Valley. Neither of them come from an agricultural background.

“My husband was a public and community service major in college and his conclusion after his studies was that farming was the kind of community service he wanted to engage in,” says Emily Donegan. “And I was kind of along for the ride.”

Despite this national reach, they stepped in quickly once the news of Family Cow Farmstand’s closure became public on Feb. 12. In an e-mail sent a week later, the Donegans announced they will scale back their herd and produce their own raw milk. Besides their family, consisting of five children under 12, they cited the community as one reason why.

“We’re always here working in the neighborhood and we’ve gotten to know almost all of our neighbors,” says Donegan. “It’s been a blessing for us and I think it’s been healthy for the community.”

“We’re hoping that we’ll be able to bring more of the community directly to the farm,” says Donegan. “Just to be able to share that with more people is really a big motivation for us.”

In its 13 years of operation, Family Cow Farmstand had three different owners. While it sold dairy, produce, meat, eggs and maple syrup, it became known for raw milk sourced from its own cows. While its final owners, Aubrey Schatz and Scott Hoffmann, could not be reached for comment, Donegan believes personal reasons inspired them to close.

Raw milk refers to unpasteurized milk which hasn’t been treated to remove bacteria. Advocates tout it as more nutritious and more accessible than store brand varieties.

“There’s a lot of people who can’t consume dairy products without digestive upset that have no problems with raw milk,” says Donegan. “Some people just think it tastes a lot better.”

However, drinking raw milk comes with risks, according to the Vermont Agency of Agriculture. The product can carry food-borne illnesses like Salmonella, E. coli and Listeria. In 2010, it was tied to three Campylobacter outbreaks in Vermont.

For this reason, the production and sale of raw milk is heavily regulated. Animals must receive regular veterinarian care and vaccinations. The milk must be tested at FDA-certified labs twice a month with results made available to customers. Donegan says they’ll be following all state regulations.

The farm plans to distribute their milk through a community supported agriculture, or CSA, a direct farm-to-consumer membership service. Vermont law currently allows raw milk to be sold only by the farm that produced it, although a recent bill passed by the House of Representatives would change this. Donegan says they’ll likely sell their products at Trillium Farm Stand in Hinesburg, which is run by her husband’s brother and sister-in-law, if it becomes law.

Currently, customers can either pick up the milk from the farm itself or have it delivered. Customers can donate any amount they want per gallon; they recommend $12 a gallon. The Donegans hope the donation system will make their milk more accessible.

Anyone interested in obtaining raw milk can e-mail the Donegans at doneganfamilyfarm@gmail.com.