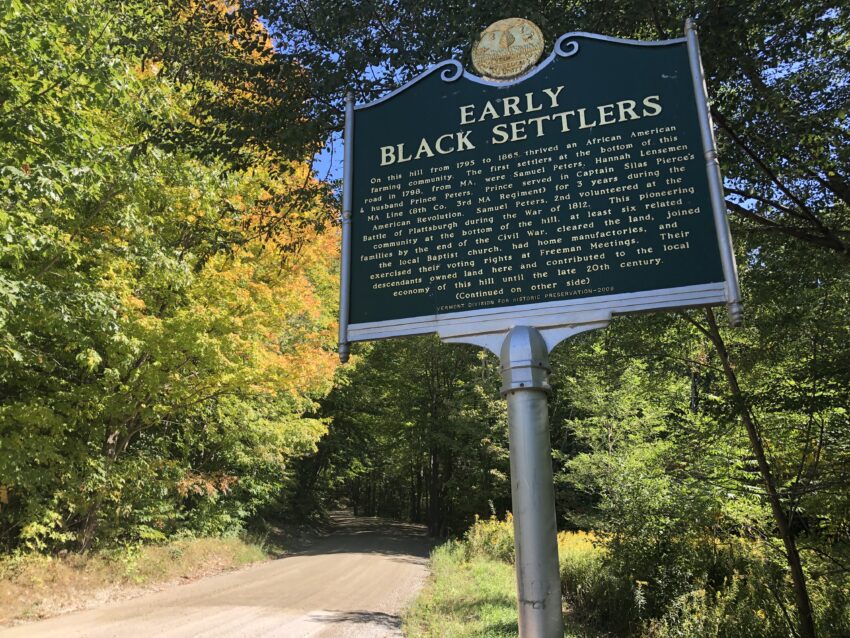 A book on early Black settlers in Hinesburg has been given a second life with a reprint by the Vermont Historical Society.

The book, “Discovering Black Vermont,” tells the stories of six Black families who farmed on Lincoln Hill just east of the town on the border with Huntington, from the American Revolution to the Civil War. It was originally printed in 2010 by the University of Vermont and the New England University Press.

It was the culmination of 20 years of work, said author and historian Elise A. Guyette. It originated when she was in graduate school and soon expanded into a part time job.

“I never thought it was going to take that long but I just kept finding so much information about these folks,” she said. “Eventually, I said to myself, well, I just have to do something.”

But it’s much more personal. For Guyette, it’s about the exclusion of non-WASP Vermonters from the state’s history textbooks, an exclusion she felt as the child of an Irish-American mother and French-Canadian-Lebanese father.

“I had been told that Blacks just went through the state and on the Underground Railroad… maybe one or two stayed in towns. But I had learned from an early age to mistrust the stories that I heard,” Guyette said.

The book recounts the stories of these six Black families from the American Revolution to the Civil War, through careful interpretation of official documents such as maps and census records.

Samuel Peters, who bought land on the Hill in 1798, lost his plot to unpaid taxes and won it back at auction for $1.17. The book also discusses Charles Bowles, who preached in the Second Great Awakening, a protestant religious revival in the early 19th century. Both contributed to the economic, environmental and cultural history of the region.

The Hinesburg farmers, like Black Vermonters generally, faced racism, the erasure of which is a source of annoyance for Guyette, she said.

“I get so tired of hearing people say Vermont was the first state to outlaw slavery… what they outlawed was adult slavery,” she said. “So that people, children and young adults, could be enslaved until they were 21. And in the 19th century, that’s two-thirds of your life.”

Many slaves were called servants by their masters, allowing them to be kept past their 21st birthday, she said.

“We are not the pure people that we think we are…a lot of people in this state are not facing it, that this state was just as racist as a lot of other states,” Guyette said.

The book is about the trials of Black Hinesburg farmers, as well as the biracial society they lived in, and the friendships they fostered with their white and Abenaki neighbors, some of whom they married and had children with.

“When we put up the historic marker on the bottom of Lincoln Hill… there were so many descendants that gathered for the unveiling of that sign who were so happy,” she said. “They were all different colors, all of these people who were descended from the same people.”

“They were there celebrating, celebrating their families whose history they had not known. That was very rewarding.”

This kind of community is what should be held up as “a city upon a hill,” Guyette wrote in her book. Nonetheless, she warns that backlash will always occur and that people must be ready to uphold democracy.

“I think history is not taught correctly. It needs to be taught that progress is not a straight-up line to just getting better all the time,” she said. “It slides backwards. And we need to be ready for it.”

A second edition with updated information is in the works, according to Guyette. The reprint is available from the VT Historical Society Bookstore. A teacher’s guide is available on their website. It is also now available on Kindle.

The Community News Service is a collaboration with the University of Vermont’s Reporting & Documentary Storytelling program.