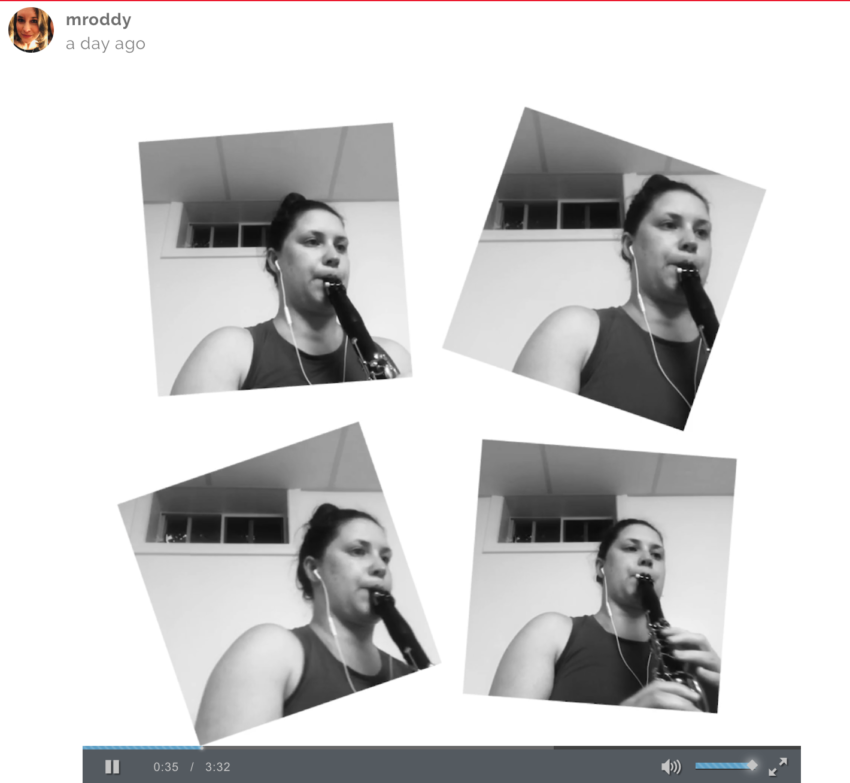 Like many other aspects of daily life, the music scene in Hinesburg has been disrupted by COVID-19. But some musicians are working hard to keep the music alive.

Although group music rehearsal is difficult, some of his band members have been posting some great individual music content on social media, Patrick said. One of these band members is Margaret Roddy.

Roddy records multiple parts over each other on the Acapella app, which she discovered in May. She has been posting videos on Facebook almost daily, of clarinet trios and quartets, playing all parts singlehandedly.

“At the beginning of quarantine I was having a huge lack of inspiration for playing,” Roddy said. “It was the outlet that I was missing and needed.”

She said that it has been a joy to share “good tunes for bad times” with her friends and music colleagues during this time.

In Hinesburg, much of the summer music scene is on hold or canceled.

“Normally [at] this time we’d be practicing for the Fourth of July parade,” Patrick said, noting that it’s usually a lot of fun that everyone looks forward to.

Patrick said it’s not easy to do a rehearsal on Zoom, or to synchronize multiple instruments in any sort of distant setting.
“[And] with singing, you have to be 16 feet apart,” Patrick said of the contrast to the standard six feet apart regulation.

Groups with three to five members are more able to socially distance and perform at a venue like a club, Patrick said. However, while his groups hold anywhere from 25 to 85 musicians, getting them all together would violate CDC guidelines.

“This time of year, people are spread out and moving around,” Patrick said. In addition, while some of his musicians play piano, many aren’t able to teach themselves music. “There’s a myriad of reasons that just make it hard to do.”

Patrick also said that a main reason for his and the board’s caution to rehearse and perform again is the quantity of members of the music scene who are seniors.

Nevertheless, Patrick has made efforts to keep his musicians engaged during these times. He has been sending sing and play-along links to his members, of pieces they were to perform, or just pieces he enjoys. These links serve as a way to keep his members up to shape, Patrick said.

“Everybody’s been telling me how much they’re appreciating the links I’m sending out, just because it keeps music in their purview,” Patrick said.

In addition, Patrick is starting to work on recording hymns with some of his choir members for them to livestream for church services in the near future.