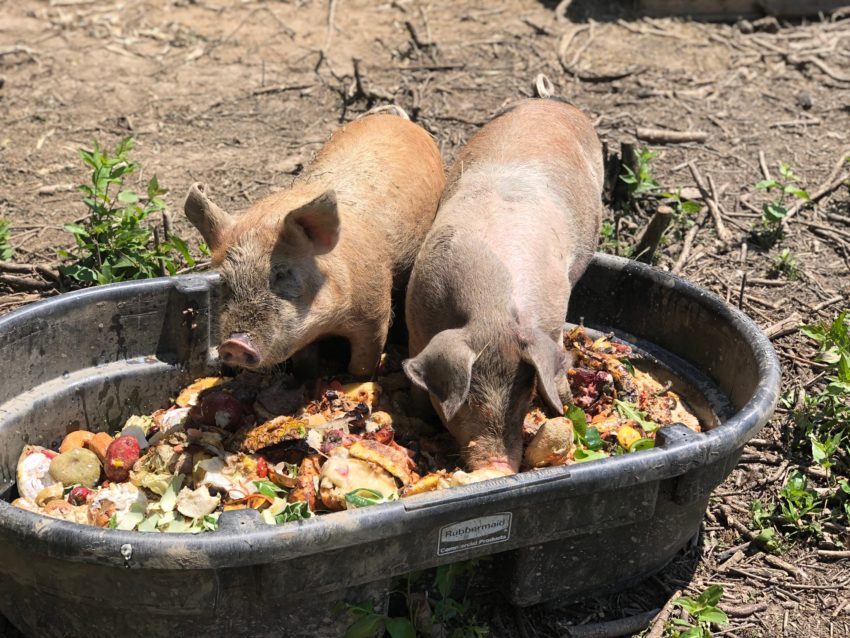 Bethany Spear’s car rumbles through Creekside Community as she collects food scraps from families every Tuesday morning between 8:00 and 10:00.

It all started June 9 with a simple post on Front Porch Forum. Spear asked families for their food scraps to feed her two pigs and sure enough, Creekside Community resident Ute Talley answered the call.

“I had no idea how to get rid of certain things that I didn’t want to put in my own personal compost. And so when she said, ‘oh, I’ll even come to the neighborhood,’ I thought, ‘oh, maybe I could make this really make this worth her while,’” Talley said.

The idea spread like wildfire. Talley emailed Creekside Community to see if each family wanted to put out their food scraps in buckets that Spear would collect. Spear met more than just a few buckets on her pick-up route. Participation was much higher than they expected, both Spear and Talley said.

“It was supposed to be like something low key too. It’s just funny. It kind of caught on and everyone else wants to do it. I think it’s over 50 percent of the community is doing it, and that was just the first week. But more people are chiming in that they want to do it,” Spear said.

Spears and Talley’s efforts run in concert with this Wednesday’s enactment of a statewide ban on food scraps in landfills under Vermont Universal Recycling Law (Act 148). The law mandates composting across the state, prompting Vermonters to dispose of their food waste through backyard composting, drop-off at composting facilities and transfer stations, or through pick-up like Spear & Talley’s model.

Both Spear and Talley anticipate more families will join in their efforts. Talley even said she expects full participation once the Food Scraps Ban is in full effect. Spear is even expanding her pick-up to Buck Hill West and East communities. If the program is successful, she will hand it over to Mountain’s Edge Farm, with whom Spears has a friendly relationship.

“It’s a win win. It’s easy for us. And those adorable pigs get a fantastic lunch that day,” said Talley.

The Spear’s food scraps pick-up is about more than just feeding her pigs: it deepens the community’s connection with the environment and with one another.

“Rather than people having to grab their bucket and drive somewhere, we have one vehicle out there that’s doing the pickup, so not so much gas is wasted,” Talley said.

As far as the community goes, Spear hopes that it will remind everyone that farms still hold an integral part of society. She finds that people often forget where their food comes from now that it’s so easy to find in a grocery store. Her food scraps program connects the food cycle back to its roots in the farm

“We have a little homestead and it seems like it’s getting the community together to think about farming and farmers,” Spear said.

For Talley, she imagines a town in which the members will become more aware of their community.

“I suspect that it’s going to make a big difference in the town because then people will realize that they can actually help within their own community, you know, providing the food scraps for farmers,” Talley said.

Feeding her own pigs, Spear links food scraps and farming, uniting distributed produce and other scraps with their origins. The families involved know exactly where their leftovers are ending up making them cognisant of food waste and the local farming.

“I don’t know what happens to the compost that gets picked up by companies, but this way we know where it’s going and that it’s that it’s a beneficial use,” Talley said.

By teaming together, Spear and Talley created a system to reduce food waste. The families benefit by supporting another local and Spear gets to feed her pigs. The food scraps bring the families closer to farmers as well as to one another.

“I think this just adds more to the sense of community,” Talley said.