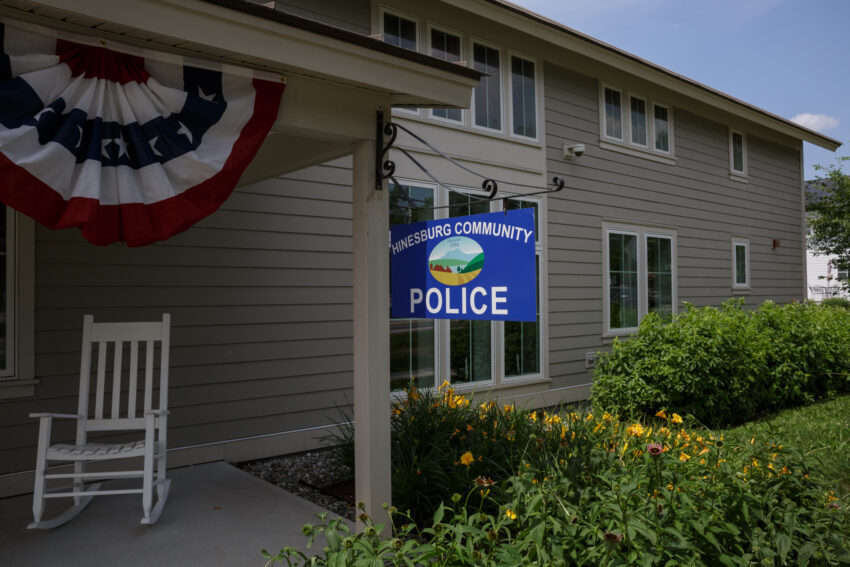 The Hinesburg Town Select Board voted 4:1 Wednesday night to accept a federal grant to hire an additional police officer, bringing the town’s full-time equivalent police force to six. The decision came after several months of debate about the costs and other concerns associated with the grant.

“In my opinion people are very, very satisfied with the community policing that they are getting,” said Selectboard Chair Phil Poeuch who spoke in favor of the new hire, “I feel very good about the direction this department has gone in and continues to focus on.”

The U.S. Justice Department COPS grant provides $125,000 over three years. The expected cost of the new hire is about $261,000, according to the discussion at the meeting. The town would be on the hook for about $136,000 or $45,000 a year. At the end of the grant the town would be responsible for the complete salary of the new officer. Hinesburg currently spends 14.5 percent of the town’s general fund on the police department.

“In my opinion we don’t have an overall large percent of our budget going to the police. So I think it’s fine to expand it,” Select Board Vice Chair Merrily Lovell said.

But Select Board member Jeff Tobrocke expressed concerns about taking on additional costs associated with the grant given the unfolding public health crisis and increasing financial stress people are experiencing.

“We are looking already at cutting town budgets in other areas because we are anticipating shortfalls,” Tolbrocke said. “This is not a time where we should be looking at adding new expenses when we have so many unknowns…It seems antithetical to the direction we’ve been trying to go over the last few months.”

The new hire would help meet community policing goals and ensure that officers are not responding to calls alone, Select Board member Jeff French said.

Although the town had initially accepted the grant in February, the national conversation about police funding and police behavior had spurred the Select Board to reconsider. They first discussed it at their July 15 meeting, postponing the final decision to July 29.

Critics of police department spending pointed to a new report from VT Digger and the Center for Research on Vermont which shows widely different spending on police services in Vermont. Hinesburg, for example, spends 19 times more a year than neighboring Charlotte, according to the report.

Andrea Morgante, who served on the Hinesburg Select Board for 27 years, said that several of the existing officer positions started with the same COPS grant. Morgante opposed the hiring of the first officer in 1993. Since then the Department has added five officer positions while the town has added about 600 people, growing to about 4500 residents.

Morgante would like the town to re-evaluate what services are needed as well as the equipment that police use, such as vehicles and guns, and decide what is necessary.

“We as a community keep ourselves safe by looking out for each other, and having good communication between different departments and between people in the community,” Morgante said. “There is a lot of the work that the police are called to do that might be better addressed by social workers.”

Several community members expressed concerns in the meeting and over the last few months about the size of the town’s growing police budget and adding new burdens to town taxpayers at this challenging time.

Police funding should be re-allocated to other town services, to address public safety more thoroughly, including issues such as mental health, substance abuse, and homelessness, said local Cody Quattrocci.

Karin P. Ward is another local resident who agrees with Morgante and Quattrocci one the idea of re-directing funding.

“Reallocation of funds for proactive social, emotional [and] mental services, especially in schools, will lead to innovative, compassionate and sustainable communities,” Ward said.

Town officials said many of those concerns have already been taken into account by the police department.

Michael Loner, Hinesburg Select Board member, said that police officers are called to situations that they aren’t necessarily trained for, such as mental health or drug overdose cases.

“I think one of the biggest problems with that is [that] you have an officer in the law who’s brought in to… uphold the law. And then in a situation where a person is not necessarily breaking the law but could become a safety issue, there’s kind of an odd  barrier there. So the officer’s looking for an illegality, but the person just needs help,” Loner said.

Loner said that the department is already working with the Howard Center, among other social services, to try to incorporate their resources into such calls.

Those in favor of accepting the grant noted that answering domestic calls alone can be dangerous for officers—hiring a new officer would mean fewer solo domestic call responses and improve officer safety. The town should accept the federal money while it’s available, Police Chief Anthony Cambridge said.

“Do we want this right now while it’s paid for and we need it, or do we want this when we don’t have the grant and it’s not paid for?” Cambridge said.

Poeuch said the Select Board will follow closely how the Department uses the new resources and how the new officer contributes to the community policing model. And at the end of the day, the voters of the town will get to weigh in at town meeting, as they do every year. “Every year the town gets to vote,” Poeuch said. “Here is the police budget…what does the town want to do?”