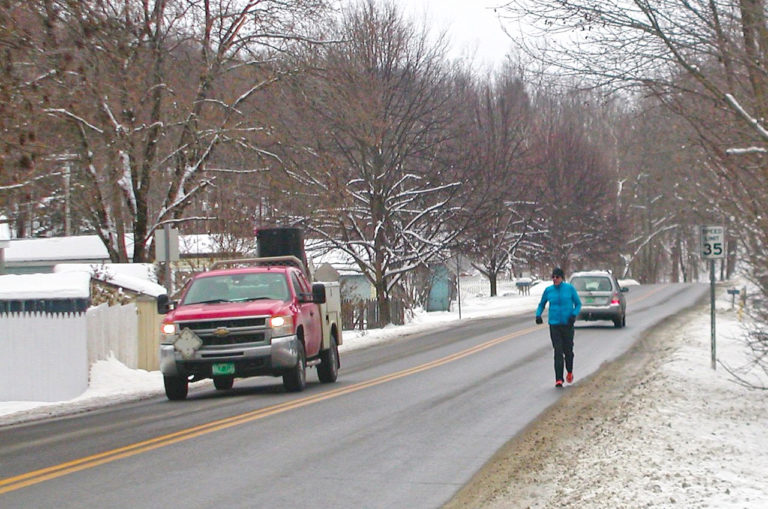 Hinesburg’s Official Map has been a hot topic of conversation recently, mostly as it relates to Lot 15 in Commerce Park. Should a Hannaford Supermarket be built there? Should the Town purchase the lot since it has been identified on the Official Map as a site for a “future community facility”?

It may come as news that the current Official Map, adopted in May 2009, has a lot more on it than Lot 15, including the location of future sidewalks — a topic near and dear to the heart of the Trails Committee. So, we are listening to the public debate and also participating in the update of the Official Map —a process in which the Planning Commission is now engaged.

Hinesburg’s Official Map indicates where future community needs, such as a park, a road or a sidewalk can be accommodated. Affected landowners are notified as the map is developed. Inclusion on the map doesn’t mean that landowners can’t develop their properties. It just means that they must also accommodate the desired community facility, or the Town can acquire the property for fair market value.

The current Official Map, and the update the Planning Commission is working on (hinesburg.org/regulations.html), shows future sidewalks along several stretches of Route 116 and elsewhere. Most of these proposed sidewalks are located within existing road rights-of-way so the greatest impediment to constructing these sidewalks is not acquiring the land but funding construction and maintenance. Some sidewalks will be constructed by developers as a condition of the permits they receive from the Town, e.g. the roads and sidewalks within the proposed Haystack Crossing Development north of Kinney Drug. But the construction of other sidewalks depicted on the Official

Map will need to be paid for via our municipal budget (e.g. direct appropriation, bonds) and/or grants.An examination of the Official Map provides Hinesburg citizens an opportunity to consider funding priorities and timing for the many good things our community desires. For example, the proposed 1.5-mile Richmond Road sidewalk running from CVU to North Road in the most densely inhabited part of Hinesburg, is depicted on the draft update of the Official Map. A 2016 scoping study, estimated that it would cost approximately $2.6 million to design and construct this sidewalk. Typically, a VTRANS grant could pay 80 percent of that cost but the town would have to come up with a 20 percent cash match of about $520,000. So, where should this sidewalk, offering safety and connectivity to so many Hinesburg residents, rank on the wish list illustrated by the Official Map?

And, on a lighter note, come join us at Geprags Park on Sunday, Feb. 10 from 3:30-7 p.m. for a WINTER PARTY organized by the Conservation Commission. Lots of fun activities are planned.