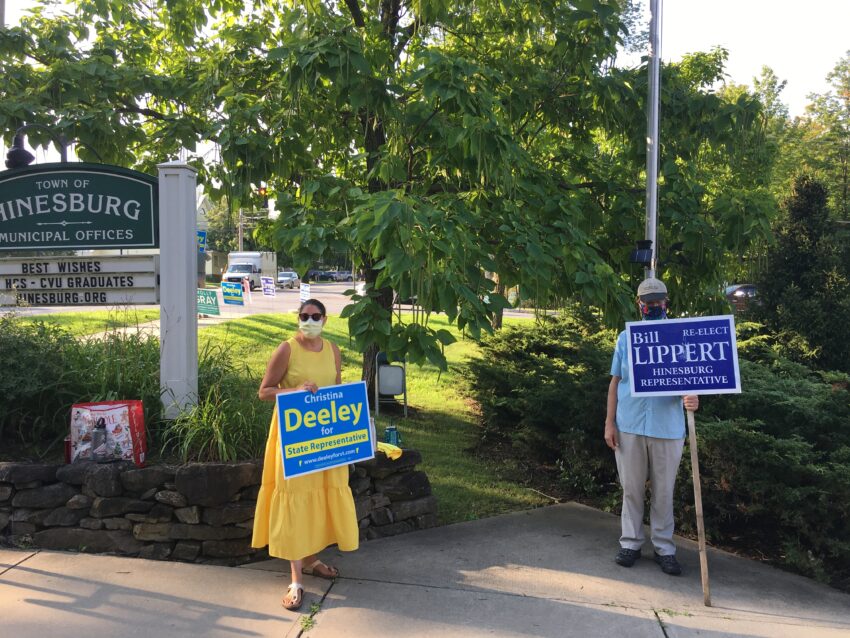 HINESBURG—Bill Lippert won the Democratic primary Tuesday for the Vermont House District 4-2, topping first time candidate Christina Deeley 723 to 451. First elected in 1994, this is the first time Rep. Lippert has had a primary challenge.

Sarah Toscano won the Republican primary 180 to 137 over Dean Rolland. Toscano will face off against Lippert in November for the second time.

Total votes cast were near record numbers, according to Town Clerk Missy Ross. More than 1,000 voters voted by mail and a quiet town hall greeted the occasional in-person voter. Gone were the familiar donuts and only two poll watchers checked in voters. Outside candidates made their final cases holding signs, keeping social distance and wearing masks.

In Hinesburg all eyes were on the campaign for the House seat with Christina Deeley challenging the 26 year incumbent.

“He has served our community and state immensely during his years in office, and I continue to thank him for that. It’s time, however, for a new voice. After his 26 years running unopposed in the Democratic primary, I knew it was my time to step up and become an active voice as state representative,” Deeley said in an interview on election day.

Lippert pointed to his years of experience as an asset to the town and the state.

“I’m proud to look at my many years of service for both Hinesburg and the state of Vermont. I’ve had many achievements while in the legislature,” Lippert said.

Toscano looks forward to the general election after successfully winning the vote against her challenger Dean Rolland. She finds herself running for a second time against Lippert.

“He [Bill Lippert] has beat everybody who’s ever tried to run against them. And because people know what they’re getting. That’s the thing is they know he’s not going to do anything shocking. Because he does the same stuff all the time. Signs off on whatever the Democrats put in front of them,” Toscano said.

While Lippert and Deeley share much in common, Lippert said, the differences with Toscano are much sharper.

“Sarah and I, unlike Christina and myself, do not share many of the same political points of view… And so if we are both running in the November election, I think the folks in Hinesburg will have a very clear choice,” Lippert said.

What they do share in common is their advocacy for mental health.

“This is a good thing,” Lippert said. “I frankly wish every legislative race across the state had mental health as one of their top issues, because if that were the case, they’d be more likely that we would actually more successfully move forward in generating the revenue that we need,” Lippert said.

Toscano, for her part is looking forward to her re-match with Lippert.

“I told him two years ago, I’m going to run until I beat him which I do realize that could be a while. ..But I think it might be time for some new ideas and some new blood in there,” Toscano said.

In the highly contested democratic primary for state senate, Senator Ginny Lyons captured the most Hinesburg votes, with 882, followed by Kesha Ram (753), Michael Sirotkin (675) and  Phil Baruth (564). Lt. Gov candidate Tim Ashe captured more votes in town, 517, to candidate Molly Gray (454) although Gray won the state vote. On the Republican side, Gov. Phil Scott handily beat back the challenge from John Klar, 308 to 81 and Scott Milne won the primary for Lt. Governor over Meg Hansen 169 to 129.