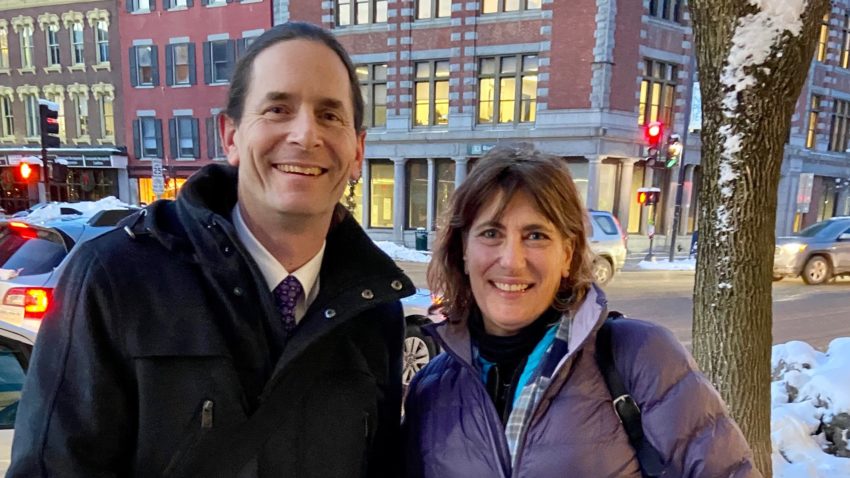 A week into this year’s legislative session, Lt. Gov. David Zuckerman announced his 2020 campaign for governor.

The Hinesburg resident and organic farmer made the announcement Jan. 13 at the Capitol Plaza Hotel in Montpelier and streamed it simultaneously on Facebook Live.

Zuckerman, who has run as a Progressive/Democrat, outlined a progressive agenda that criticizes his perceived inaction of two-term Republican Gov. Phil Scott. “Through the years I have listened to many Vermonters as they have shared their economic struggles and I’ve observed well-intentioned leaders trying to find solutions, but these last three years we have not seen the vision or action that Vermonters need,” Zuckerman said.

Zuckerman is in his second term as lieutenant governor having won election to the state’s second-highest office in 2016. That followed four years in the state senate and 14 years in the Vermont House of Representatives.

In order to run on the Democratic ticket, Zuckerman will face a primary contest against at least one other contender, former state Education Secretary Rebecca Holcombe. Others are reportedly considering entering the race including Attorney General TJ Donovan.

Zuckerman’s campaign platform features many of the issues that he has spearheaded during his time in Vermont politics, such as the pursuit of affordable housing, expansion of healthcare coverage, tackling the climate crisis, and increasing the state’s minimum wage.

“I’m running for governor because I see great opportunities to address these struggles and I want us to really do something about the economic challenges that keep getting talked about,” Zuckerman said at his announcement.

The lieutenant governor’s decision to enter the race did not come without heavy consideration of life in Hinesburg. “My family is incredibly important to me. Though a privilege, public service requires dedication, time, and energy, so I had to weigh many factors,” he said. One of those factors is Full Moon Farm, the certified organic farm that he owns and runs with his wife, Rachel Nevitt.

“In the end,” Zuckerman continued, “the urgency of our challenges, the opportunity to serve, to lead, and to do great things with the people of this state was clear. I know we can accomplish so much together.”

Meanwhile, Gov. Scott is expected to seek a third term although he has yet to announce his intentions of running for re-election.

A former campaign volunteer for U.S. Sen. Bernie Sanders in the 1990s, Zuckerman remains a strong ally and supporter of Vermont’s Independent senator and current presidential candidate. That connection could be a benefit especially if Sanders were to win the Democratic presidential nomination and be on the November ballot.

But whoever may challenge Scott in November would find a significant challenge against a popular sitting governor in a state not known for ousting incumbents. One theme Zuckerman emphasized for his campaign is a promise to “ensure all Vermonters are welcome.” That inclusivity will be critical to anyone vying for electoral support given Scott’s bipartisan popularity. The global political surveyor, Morning Consult, recently reported Scott’s approval rating at 65%.

“The people of Vermont are the best resource that any campaign or government can have, and I look forward to expanding connections in our communities, gathering ideas, and working with Vermonters as our campaign progresses,” Zuckerman said while also noting that his immediate priority is focusing on the legislative session and his role in the state Senate.

“While the legislature is in session, my focus will be on leading the Senate proceedings and working with everyone to be sure all voices are heard and included, as that is the foundation of our democracy,” he said.

Zuckerman added that he plans a larger campaign kick-off after the session ends.