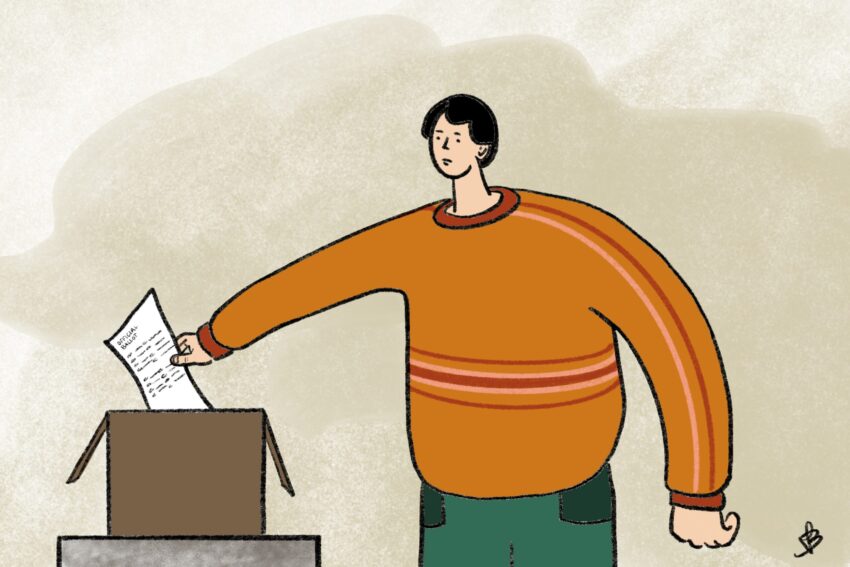 Hinesburg residents will consider several consequential ballot items on Town Meeting Day on March 2, including changing the role of town administrator to town manager. The change, which could shift the decision-making authority and organizational structure of town governance, has been hotly debated in recent weeks.

Hinesburg currently has a town administrator at the helm, which is common in smaller towns. As stated in the informational mailing that was sent to all residents, “73% of municipalities over 2,500 population have managers.” The population of Hinesburg was 4,396 at the time of the 2010 census. Given its current size and growth, many believe the shift to a town manager is logical. Opinions among those with experience in rural municipal governance suggest the decision is not so black and white.

Under either structure, the job is broad and demanding. “It’s anything from handling a dogfight complaint to applying for a grant for the wastewater facility. It’s so varied,” said former Colchester Town Manager Dawn Francis. “You really have to be a Jack or a Jill of all trades.” Francis is helping with the hiring of the next Hinesburg administrator or manager.

Francis cites liability issues with the administrator model as a reason to consider the change. “The selectboard being a lot more involved in the day-to-day might put the town in a vulnerable position, particularly as the selectboard isn’t aware of the various laws and regulations that govern Vermont towns.” She went on, “A manager comes in professionally-trained and having experience with labor laws, environmental regulations, financial accounting standards, etc., and expects to use it. Without that background, the town could face losses and long-term disability.”

Hinesburg resident and municipal governance professional Ann Janda agrees. She likens a town manager to “a CEO that has to report to a board of directors.” One problem Janda sees with the administrator working under the selectboard is that “selectboards are publicly-elected and have political agendas.”

In a recent article she posted in the Hinesburg Front Porch Forum, Janda also cited selectboard involvement in day-to-day issues as a problem with the town administrator form of government. “We’ve been lucky in Hinesburg to have had high-quality elected officials. They really shouldn’t be expected to have all of the professional and technical knowledge that’s required to run a municipal government.” Municipal operations are highly specialized and technical, involving issues like wastewater treatment and stormwater mitigation. “With an experienced town manager handling these operations, the selectboard can return to its political agenda.”

Janda and Francis agree that the staffing abilities of a town manager are also important to consider.

“A manager can really see on the ground where the staffing needs are, whereas a selectboard member might not be able to see that,” Janda said. Hinesburg does not currently have a human resources person or a finance director. The administrator is currently filling all of these roles.

A manager could hire a human resources professional to do research on liability issues that nobody else has time to consider but could end up being extremely costly for the municipality if not addressed. Janda says that “Hinesburg needs somebody to not only make recommendations but to actually be able to make those changes without the selectboard directing them.”

An informational mailing that recently went to Hinesburg residents states that professional town managers may cost more in the short-term than administrators, but Selectboard Chair Phil Pouech clarified that there may not be a significant long-term difference between the two. “Since we’re in the process of hiring a town administrator/manager, I think the town should expect we’re going to end up having to spend more money short term looking for someone to fill the position,” Pouech said.

Overall, he suggests that there isn’t a big difference between the administrator and manager form of government, as long as their power and duties are clearly defined.

Johnson Town Administrator Brian Story agrees. “You can run an administrator that looks a lot like a manager,” said Story. “If the selectboard of the town decides they want to grant a great deal of independence to the administrator, they can.”

As far as the informational mailing’s suggestion that there is more turnover in town administrators, this isn’t always true. “Less selectboard involvement can make the workplace more volatile and that’s a real danger,” said Story.

He referenced Rockingham as a town that had intragovernmental disputes after their switch to a town manager form of government. Rockingham documented a significant turnover in town managers, which eventually led to fewer applicants for the job.

Regardless of the outcome on Town Meeting Day, everyone interviewed for this article suggested that there is a great deal of discretion in how towns define these roles.

“Whatever it is, manager or administrator, I want to make sure it’s just really clear so that everybody knows what they can do and what they can’t do,” says Phil Pouech.

Vermont Town Meeting Day is Tuesday, March 2. A virtual information meeting on this and all Hinesburg ballot items will be held on March 1 at 7 p.m. via Zoom and livestreaming. Hinesburg Residents can vote in-person at a drive-through poll at the back of Town Hall on March 2, which is also the last day to drop off ballots. Early voting has been strongly encouraged.