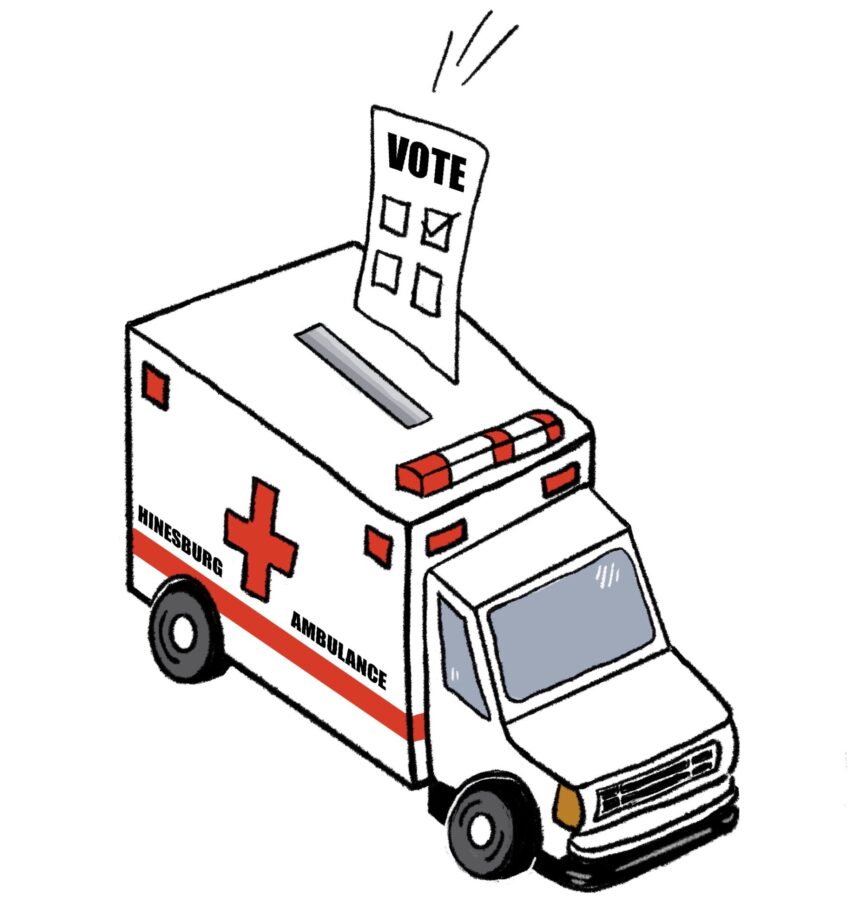 Hinesburg residents will soon decide on whether or not to move forward with a plan to operate a town ambulance service.

St. Michael’s College has been Hinesburg’s primary ambulance service for 50 years, said Eric Spivack, a Hinesburg assistant fire chief. St. Mike’s recently told the town that it would end its free service in July of 2021, raising the question of how best to get ambulance service to Hinesburg. The two plans on the table are Hinesburg running its own service — a more expensive plan — or contracting out from surrounding towns.

Town residents Terry Wilson and Nancy Anisfield have offered to donate an ambulance to the town, according to the Hinesburg fire department website and selectboard meeting minutes, which is what initially sparked discussions of starting a new service.

If Hinesburg were to run its own service, it would be staffed by a new full-time EMS position during the day, and the fire department’s normal staff at night, said Spivack.

“The ambulance is going to be housed in the current building and our med unit will be moved to the old station to be run as our backup EMS vehicle,” Spivack said.

If the town were to vote to operate its own ambulance service, “Optimistically by mid-summer, we should be able to start operating,” Spivack said.

Coming up with estimates for the cost of the services has been difficult and has been a constantly shifting target — even to people intimately involved.

“The select board, over the past four or five months, we’ve seen renditions of the budget and it’s changed, often. It’s changed every single time we’ve seen it,” said selectboard member Mike Loner.

The most recent version of the budget was revised and cost estimates increased on Oct. 9, well after mail-in voting had already begun — as of Oct. 14, over a quarter of all mail-in ballots in Hinesburg have been returned, according to state absentee voter data.

As of Oct. 14, Loner had not previously been made aware of the budget update. The last selectboard meeting regarding the ambulance used the old budget numbers, Loner said.

Spivack said the recent increases are due to updated health insurance premium estimates.

When asked about the concern that voters may not have a clear understanding of the costs, especially when budgets are changing while votes are being cast, Fire Chief Al Barber said November’s vote is just “part one,” as voters will again have to approve a final budget on Town Meeting Day next year should they give the thumbs up in November to establish a Hinesburg service.

“The rubber meets the road in March really, when we actually have to vote on a budget for it,” Barber said. “If it’s not the right numbers, the voters have an opportunity to say no.”

“People are saying it’s going to cost millions and millions of dollars. That’s not true. And an ambulance does not mean we’re going to right away go and request a new building,” Spivack said.

The alternative to the town starting its own ambulance service is contracting services from surrounding towns. Both Charlotte and Richmond have sent proposals for covering parts of Hinesburg.

Charlotte has offered to cover Hinesburg west of Route 116, the Mechanicsville loop, and Hinesburg Village, according to a letter on the town website from Tom Cosinuke, the president of Charlotte Volunteer Fire and Rescue Services, Inc.’s Corporate Board. This would cost $56,250 in fiscal year 2022.

Michael Chiarella, the director of Richmond Rescue, sent two different proposals to Hinesburg. One proposes service covering part of the town at a cost of $45,050, and the other proposes full service at a cost of $53,000. They also said they would cover dispatch fees, which puts the estimate a little lower.

“We still believe that a combination Richmond-Charlotte plan would strike the right balance between cost, response time, and level of service,” Chiarella wrote to Renae Marshall, the town administrator, in an email.

Tom Ayer, a former member of the Hinesburg select board, agreed with Chiarella.

“With these other towns and their infrastructure already in place, it doesn’t make a lot of sense for Hinesburg to start a new service when those other services which are established are being utilized to the tune of three percent and eight percent of the time,” Ayer said.

“Basically this means their ambulance was on calls for 1.94 hours each day leaving them available for calls the remaining 22.06 hours,” Ayer wrote in an email.

There is not this type of breakdown for the Charlotte/Richmond combination plan. The partial Charlotte and the partial Richmond plan combined add to about $101,300, which would put its tax impact somewhere in the middle of the above two estimates.

There is some concern in the town about the financial sustainability of the plan, especially after fiscal year 2026.

“That’s kind of the point where we don’t know what happens next. The thought is we buy a second ambulance… I think going into year seven and eight, how much that’s going to cost the town, it’s really difficult to say,” said Loner.

Both Ayer and Loner also brought up the wastewater bond vote also occurring in November, something that will add to the tax burden of Hinesburg residents.

“There are so many other factors there that just make adding another service kind of financially irresponsible,” said Ayer.

Some residents are worried about staffing a Hinesburg-run ambulance. Dawn Francis, a member of the original ambulance committee and someone with experience in EMS and rescue, questioned the amount budgeted for paying staff.

“How will Hinesburg compete with retaining and attracting personnel when surrounding towns are paying more and providing more benefits?” she wrote in a public comment.

The budget has also cut down from the original three full time staff to only one, according to Francis.

Barbara Forauer, another resident, wrote in another public comment, “As a town we do not have the staff to support our own service. We would need to hire at least one fully certified EMT full time person with help from sometimes available volunteers. This seems too unreliable a situation.”

Spivack, however, said that he feels they do have enough staff to support the service.

Two advantages of Hinesburg running its own service, said Spivack, are time and revenue. “The upside of our own ambulance is that we will be treating the patient and we will arrive on scene to triage the patient in the ambulance and transport to the hospital faster than waiting for an outside ambulance to come in,” he said. He also said, however, that St. Mike’s longer response times were never an issue because of Hinesburg’s first response team, which has been operating since 2001.

“It would be a comfort to know that assistance is very close by,” wrote Jen Thompson, a Hinesburg resident, in a public comment in support of the Hinesburg ambulance service.

Revenue is another benefit to running an ambulance service, said Spivack. “There’s going to be no offsetting revenues if we contract,” he said. This money, he said, comes from insurance and what patients are charged for using the ambulance.

However, projected revenues are already factored into the proposed budget, meaning $186,315.80 for fiscal year 2022 is the net cost. Even considering that potential income the cost still greatly outweighs revenue. These projections are based on St. Michael’s revenues, according to Francis’ public comment.

Factoring in revenue to these estimates is difficult, Ayer said.

Some residents, on Front Porch Forum and elsewhere, have raised concerns about questions, especially about budgeting, going unanswered. “They are being answered. We are being very open. We are providing all the information that is needed,” Spivack said in response to those concerns.

Many of those worried about the plan for Hinesburg to run its own ambulance service, including Loner, Ayer, and Francis, feel that sharing services is a more viable option.

“My thoughts on this have nothing to do with the people who would run [the service]. The fire department, they do a great job,” said Ayer. Similarly, Loner said, “I don’t think we should be looking at the ambulance vote as some sort of referendum of the fire department.”

There will be a public information meeting on Zoom regarding the ambulance question on Oct. 28 at 7 p.m.

The Community News Service is a collaboration with the University of  Vermont’s Reporting & Documentary Storytelling Program. Cory Dawson contributed reporting to this article.