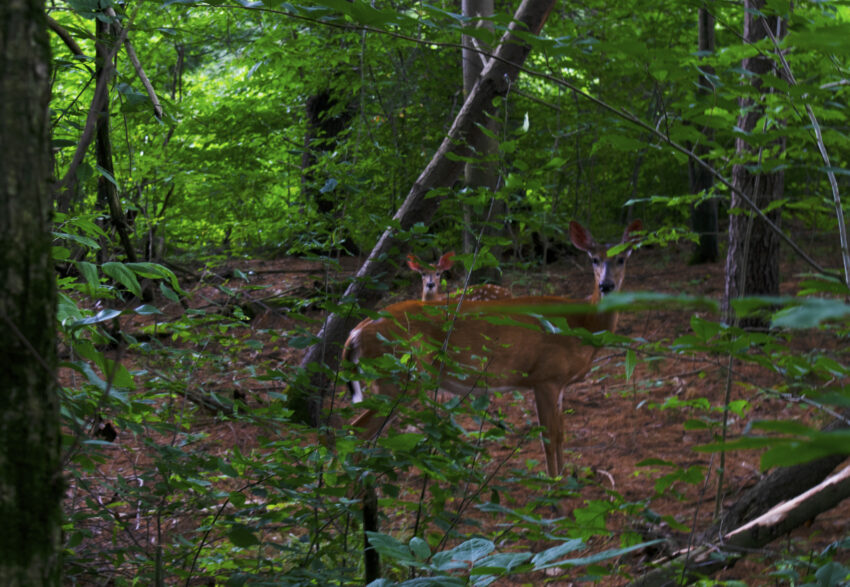 “I think we’re going to have quite a meeting,” Committee Chair Pat Mainer said in anticipation of the first Town Forestry Committee meeting of this month.

The Committee received over a hundred emails concerning forest closure for hunting season. Usually without any public attendance, the meeting had an all time high of twelve Hinesburg residents joining the committee members.

COVID-19 made the decision especially hard for the committee. Now more than ever, people are looking to the outdoors for recreation.

“The thing we really need to think about, and I hate to be the Debbie Downer here, is we are in a global pandemic. We are in this little safe bubble of Vermont right now and things are looking really good here,” Nison said. “But I don’t know what the fall and the winter are going to look like so I would just hope that we can keep that in consideration for just this year that it is providing relief to many people to be out there.”

Ending the initial meeting on July 9 without resolve, the TFC resolved to hold a second meeting two weeks later to specifically address a schedule for forest closure to allow hunting. The Committee finally came to a final decision at a meeting July 23.

At the meeting, the TFC batted around many possibilities. These included closing parts of the forest and leaving others open, keeping the forest open for certain hours, and changing which dates the forest remains closed for non-hunting recreation.

In the end, the forest needs to be either completely closed to non-hunters or completely open for them in order to keep forest all users safe during the selected dates.

An equally important part of the puzzle is controlling the deer population.

“Part of our decision making process was an acknowledgement that human activity and hunting are in conflict when people are in the forest it prevents deer form being active in the day when they can be taken it drives the to being nocturnal and that is the fundamental flaw of the geographic and temporal kind of sharing of the forest during hunting season,” Forest Committee member Aaron Miller said.

Deering hunting is more than just a recreational activity: it is vital to the ongoing health of the forest.

“It’s worth taking really serious steps to try and proactively get ahead of this deer overpopulation issue,” Chittenden County forester Ethan Tapper said. “And secondly, we are seeing the impacts of deer overpopulation in the Hinesburg Town Forest completely. I’m seeing it all over the place. And this is something that we really want to get on top of.”

Tapper, along with Deer Project Leader of the Vermont Fish and Wildlife Department Nick Fortin, said that winters are the biggest control on deer population. However, with winters becoming less severe due to climate change, the deer population continues to grow even faster.

Deer eat new young trees, which prevent a new forest from growing as the mature trees in forest age. Deer browsing on wildflowers decreases the number of pollinators, insects, bees, and butterflies.

Not only do deer eat the lower vegetation that songbirds nest in, they even prey on their nests and consume their eggs. A lot of smaller and larger mammals are impacted as well, including turkeys and bears, Fortin said.

Deer alter the forest composition by browsing on native species and the specific plants that they prefer. Their selectivity creates a monoculture and increases the population of invasive plant life.

“It’s a severe threat to forest health, forest biodiversity. It hurts the ability of our forests to be resilient and adaptive in a changing climate,” Tapper said.

With apex predators like the catamount and wolf gone from Vermont, natural controls aren’t enough to prevent deer population from increasing. Humans are now the main predator of deer, Tapper said.

“I do not know of another effective way to manage a deer population. Hunting is really the only effective tool that we have to reduce the number of deer that are out there and therefore reduce their impact on the forest,” Fortin said.

Deer pose a serious threat to forest health and will in turn impact all users of the Hinesburg Town Forest. Even though the closure is necessary for forest health, many residents find it utterly disappointing especially during this pandemic.

HEADER: DOE AND ONE OF HER TWO FAWNS IN FOREST NEAR TEXAS CIRCLE. PHOTO BY OLIVIA NYE.