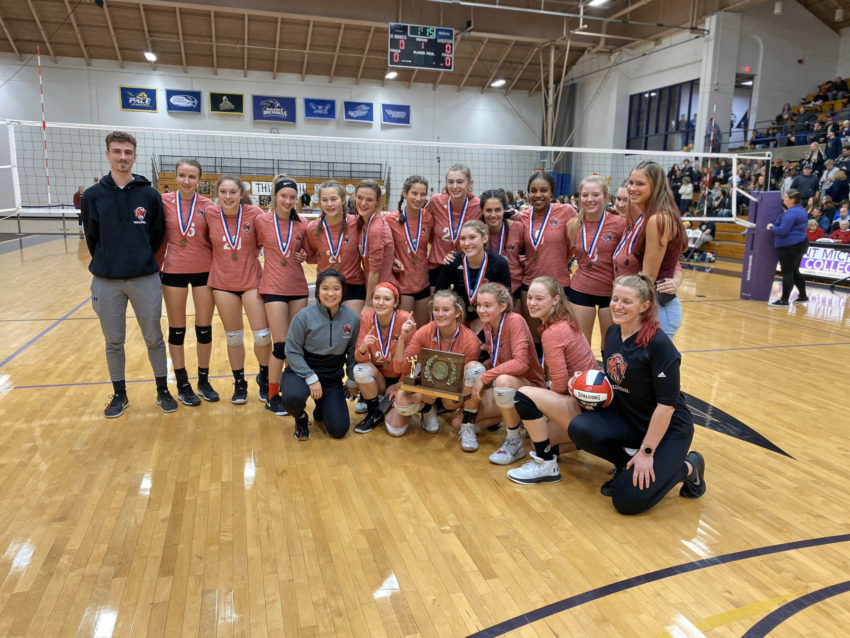 “We are fortunate to have a financially well-established community that provides students the opportunities to play high school and travel sports,” Shepardson said. “A lot of our parents provide these opportunities.”

In addition to the community support, Shepardson praised the team dynamics fostered by coaches and students alike.

“We have great coaches who understand the game and understand developing a culture of success that is predicated on doing the right thing,” he said.

This culture creates an atmosphere of teamwork, comradery and supporting for one another among the student athletes.

“When you do all of these things — with some luck — then good things happen,” the athletic director said.

Winter season sports are already getting underway. Redhawks hockey was to begin Nov. 22 with a girls match; basketball dates on the schedule start Dec. 5. CVU alpine and Nordic skiers are in training ahead of their race season while gymnasts and wrestlers look forward to their meets being in full swing after the holidays.

After a commanding performance that won them their 11th Div. I state championship, CVU girls cross country continued their season’s dominance at the New England championships in Manchester, Conn., where they claimed their third regional title in the last four years.

The team heads to the Northeast Regionals at Bowdoin Park in Wappingers Falls, N.Y., on Nov. 30.

The boys cross country team emerged from the Div. I  state championship in Essex victorious, scraping by a narrow victory and swiping the title from under the Hornets’ noses. CVU responded to first and second-place finishes from Essex runners with a slew of CVU runners. CVU first-year Mattew Servin at 17:15  placed fourth, then came junior Caleb Nye in seventh place; sophomore Drew Buley in ninth, and junior Gavin Schaaf placed 12th. On Nov. 9, the team went on to place in 19th at the New England championships in Manchester, Conn.

A valiant season ended at Middlebury College Oct. 30 with a narrow 1-0 loss against No. 6 Bellows Falls at the Div. I state semifinal for CVU girls field hockey. Sophomore Sophia Stevens, normally a defender, made a surprise appearance in goal due to a player injury and provided an impressive performance for the No. 2-seeded Redhawks.

The girls earned their spot in the semis after a 4-1 defeat over No. 7 Essex in the quarterfinals.

CVU football ended its 2-7 season in the state Div. 1 playoff consolation game against South Burlington-Burlington on Oct. 25. Seth Boffa on a 45-yard run got on the scoreboard for the Redhawks with their only touchdown for the 35-7 match. The SeaWolves ended their season 3-6.

CVU’s first championship title this fall came Oct. 10 at the boys golf Div. I title match at The Quechee Club. Senior Nate Godbout led with a 74 followed closely by  Evan Forrest with a 76, Alex Leonard at 76, and Kyle Rexford’s 78.

The win was the second top finish in a row after CVU boys won the 2018 title. CVU finished 10 points ahead of second-place Rice Memorial High School.

Now in its fourth year as a program, CVU girls golf led by seniors and captains Taylor Hoar and Courtney Vincent secured a noteworthy fifth place in the Vermont Div. I championship.

For the third year in a row, CVU girls soccer seized the Div. I state championship, defeating No. 3 Colchester 4-1 in the title match on Nov. 2. The top-seeded undefeated Redhawks had fans on the edges of the bleachers at Burlington High School after a scoreless first half. Josie Pecor scored two goals in the second half along with Catherine Gilwee and Gillian Magnier.

CVU boys soccer successfully defended their Div. I title, winning a second state championship in a row, shutting out No. 6-ranked Mount Mansfield Union, 3-0. The intense finale to the 16-0-1 season for the Redhawks came at Burlington High School. Team captains Cullen Swett and Jonah Roberts connected for two of the shots with a third landed by Jami Lashua.

The boys landed in the final matchup after eliminating Brattleboro Union, 7-1, in the semifinals and Burr and Burton, 7-0, in the quarterfinal game.

The title win marked the first time the program has won consecutive championships.

No. 1 seed CVU boys volleyball captured the Div. I State championship this season for the fourth time in as many years. A standout performance from Jacob Boliba helped close out the 3-0 set win against No. 2 seed Essex High School.

Following wins against No. 8 Rice Memorial High School in the quarterfinals and No. 4 Lyndon Institute in the semifinal, the Redhawks’ championship game capped off an undefeated season.

Seeded at No. 2, the CVU girls volleyball team came away victorious in what proved to be an electrifying Div. 1 state championship game versus No. 1 seed Essex High School. In a 16-14 fifth and final set, the Redhawks brought down the undefeated Hornets.

The final rounded off a 15-2 season for the Redhawks, following victories against No. 7 Lyndon Institute in the quarterfinals and No. 3 South Burlington in the semifinals.