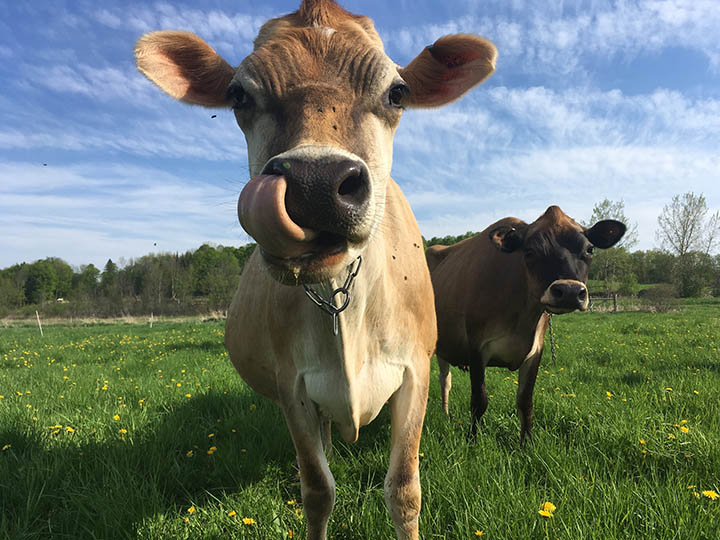 CSA is a farming method in which shares of the produce a farmer expects to grow in a given season can be bought. According to the original model, customers then receive a fixed share of the produce throughout the season.

Full Moon Farm, owned and operated by David Zuckerman and Rachel Nevitt, adjusted their CSA model when the demand for new shares stagnated. The original intention of their CSA was “to create the direct consumer to farmer connection.” Today, their CSA model has changed, but the intent behind it has not. Not everyone enjoyed “the ‘inconvenience’ of having to be at a specific time and place to get the food that was prescribed for you,” so their CSA adapted a “choose your own produce” policy with more flexible pickup hours, while the direct relation to their customers was preserved.

David’s “biggest concern is that whatever a customer’s goals are, they’re actually getting them.” Deceiving packaging can fool customers into investing in the wrong products. The message David and Rachel really advocate for is that those who have some flexibility with their money must begin to prioritize their food — where it came from, who grew it and how. “In our consumer society, we have prioritized a lot of things as being where we put our money. We’re lucky in this area, but there’s more folks yet to be reached.”

The CSA…is of the upmost importance to the continued survival of small farms.

Despite Chittenden County’s support of local food, farming is growing increasingly difficult. According to Rachel, “it’s global climate change.” Prolonged periods with or without rain, or rapid fluctuations in temperature brought about by huge winds, can greatly impact a crop. Further, those winds carry new pests and difficult to remove weed seeds. “We usually have four rooms filled with food at the end of October. This year, one and a half. It’s mayhem.”

“The vast majority of people would not be satisfied with the financial return.”

Trillium Hill Farm is owned and operated by James and Sara Donegan. Trillium Hill has also been experiencing declining interest in their CSA, and selling at farmer’s markets offers more potential for inconsistent sales. James tells me that although “the vast majority of people would not be satisfied with the financial return, I’ve decided to keep limping along with it.” James and Sara are always adapting to the changing demands of their customers. “Right now, it seems like there’s less interest in CSAs and more in the grocery stores.” The so-called “world of convenience” has impacted a variety of businesses, but arguably, small farmers are the hardest hit of all.

Incoming grocery stores may further threaten the ability of farmers like James and Sara to continue to operate their farm. Since Trillium Hill is a smaller producer, they aren’t sure larger chains would bother buying from them. Trillium Hill currently sells to a variety of local grocery stores, but when the CSA option is forgone, some of that direct customer relation is lost. “As I do more sales at grocery stores, there will be more customers who are looking at the options and don’t necessarily know Trillium Hill Farm or me.” Because of that disconnect, James is not able to share that his farm practices organic farming methods, but is not certified organic.

Despite the waning interest in Trillium Hill’s CSA, “it seems like the grocery stores are more and more interested, and people are increasingly looking for more local foods in their grocery stores.” Continuing to receive the community’s support, whether it be within the CSA, at your local grocery store, or eating out at a restaurant, is of the upmost importance to the continued survival of small farms.

Family Cow Farmstand, owned and operated by Aubrey Shatz and Scott Hoffman, has been selling raw milk since 2008. Raw milk is a great and delicious alternative to conventional milk, as it contains a variety of health benefits. For Family Cow, making the customer aware that raw milk is available and educating them on the benefits can be difficult, especially as the milk must be sold on their farm or paid for in advance. Aubrey and Scott are also up against the customer demands of convenience and affordability. “Our constant game is how do we convince someone in Burlington to regularly drive to Hinesburg and buy milk in a glass jar, or get it delivered … it’s expensive, too — so it’s challenging.”

As Aubrey tells it, and many other farmers will agree, “farming is one thing, but it’s running a business.” The business aspect poses constant challenges for farmers who must also care for their farms every single day. Today, the responsibility to educate and spread awareness of the many benefits of eating locally and organically, especially through CSA, falls on the shoulders of the farmers already working in the field. In the coming years, we should work to ensure that responsibility rests with us all.