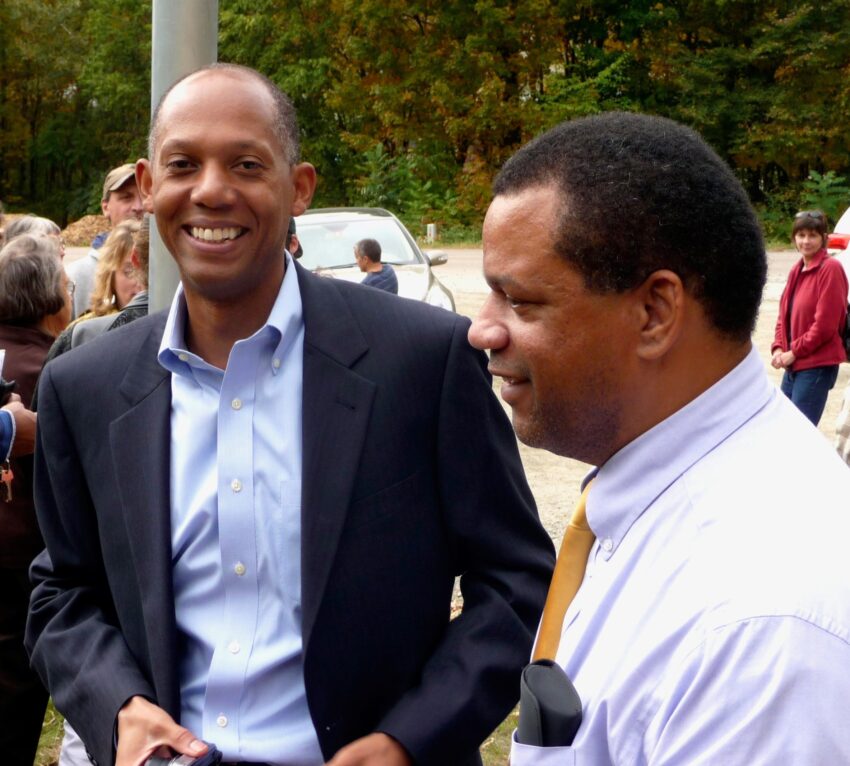 Today, Edward Langley Proctor, III — better known as Langley Proctor — is in Australia, working with IT company Fujitsu on bringing their products to market. Last Sunday, Monday morning his time, he spoke about his family history and his connection to Hinesburg’s early Black pioneers.

“When someone has a background in history and is willing to put their lives on the line to help move the future forward, it’s very impressive,” Proctor said.

“Since the beginning, the Langley family has been moving the future forward. One of its earliest known members, Almira Langley, lived in Hinesburg, according to historian Elise Guyette. The daughter of farmers Shubael and Violet Clark, she married William Langley, who moved to there from Pittsford in 1821. The couple contributed to the local economy by herding sheep and churning butter.

Their son, and Proctor’s great great grandfather, Loudon Langley, was a dedicated abolitionist. In the 1850’s, he wrote to newspapers advocating for rebellion against slaveholders in Cuba and condemning the colonization of Liberia. His family hid runaway slaves on the Underground Railroad and he married a woman whose family did too.

In the 1860’s, he and his brothers Newell and Lewis fought in the Civil War. Loudon fought in the Thirty-Third United States Colored Infantry Troops regiment in South Carolina. He stayed behind to help rewrite the state’s constitution during Reconstruction. He and Lewis are buried in Beaufort, South Carolina. Newell is buried in Williston, Vermont.

“They were free blacks at the time where they lived,” Proctor said of Newell and Loudon. “But they joined to start and help change the world.”

Changing the world was also a goal of his father, Edward Proctor, Jr. In the late 60’s, he worked with NASA on Apollo missions. For Apollo 11, he worked at a tracking station in Guam, helping the astronauts return to Earth.

For this, he received a medal made from parts of the Apollo 11 spaceship. He was so well known that he received a thank you note from Neil Armstrong — the first person to walk on the moon — who flew out to the Guamanian station in 1969. At the time of Apollo 11, Langley Proctor was 6 years old. Today, at 57, he cherishes the medal and note from Armstrong, which serve as family keepsakes and childhood memories.

“We used to live all over,” Proctor said. “We lived on Guam at the time during the Apollo stuff… we moved to different areas because he was really a famous scientist in a way. He was just very smart with mathematics.”

Langley Proctor himself was born in Ohio. He graduated from Keene State College in New Hampshire, with a Bachelor’s in Mathematics and Computer Science, according to his LinkedIn page. He had previously done work for Cisco, Microsoft and Citrix. He helped develop email systems and Google’s search engine, he said. All of this involved ample traveling.

In 1998, he visited Australia and met his current wife, Caroline Proctor. The two married and lived in New Hampshire until 2017. Today, he lives with her in Sydney where she can be close to her family. He has personal experience with the country’s issues. Just last weekend, he witnessed a wildfire during a walk with his wife.

“We could see this fire burning and we could see the helicopters dropping water on it,” he said. Proctor later said they were escorted out of the area as it was being evacuated.

“It’s just part of Northern Sydney right by the beach. No land. And it did burn so wild that they had to escalate us out… and that was just last week,” Proctor said.

Proctor never knew of his connection to early Black Hinesburg until the mid-2000s. He’d heard rumors of being related to Loudon Langley. He’d never been able to prove it until he met Vermont historian Elise Guyette.

“I was up there; I was just mapping out my family history at the time,” he said. “It was before she wrote the book [“Discovering Black Vermont”]. We started talking about it and she told me more details about Loudon Langley.”

Collaborating with her and his family, he was able to prove he was related. To Elise’s book, he contributed what he’d learned along with a picture of Loudon Langley’s daughter, Ida. Ida lived in Ohio with her husband Harry Proctor after the Civil War.

Despite this connection, Proctor doesn’t often visit Vermont. In 2009, he came to the state when the Vermont Division for Historic Preservation erected a roadside marker honoring the Black settlers. At the unveiling, he gave a talk about the Hinesburg Langleys alongside Guyette and other descendants of the settlers.

Before the pandemic, he planned to come back as part of a trip to New Hampshire and Canada. But the strict lockdown procedures in Australia prohibit international travel, he said. A visit to Loudon’s grave in South Carolina is also on his bucket list.

One Step Forward, Two Steps Back

In modern America, racial division is more prominent than ever. Proctor is nonetheless optimistic.

“It’s one of those things where it kind of takes two steps forward and one step back… it’s just the way the world has always been,” he said. “There’s not much I don’t think you can do to change that but, eventually, it will hopefully get better.”

Proctor believes it’s important for Hinesburg to recognize the hard work Loudon Langley and his family did to change the world.

“They moved up there to live, be free and have a proper life,” he said.

“Because of what was going on in the world at that time, they wanted to get involved and change and make it a better world for everyone. And they risked their lives to do so. And they’re part of that community,” Proctor said. “The community should always know the history of people that work that hard and have tried that hard to move the world forward.”