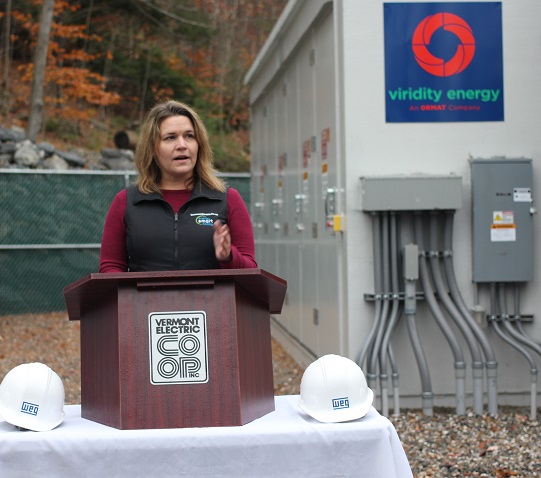 The buildings resembling shipping containers full of stacks of batteries in Hinesburg make a slight buzzing sound if you listen closely.

The fenced-in system is generally quiet, but if one were to walk by or through it, a faint electric buzz can be heard emitting from the structures, Brown said.

These batteries are the utility’s new development intended to store renewable energy to be deployed into the grid during peak load times, Brown said.  “Their main purpose is to avoid buying expensive energy at peak times,” he said, adding that since the batteries were put in use July 20, the electric co-op has saved more than $90,000.

The battery system allows the utility to use stored power when the demand for electricity is at a peak and when electricity prices are highest. It is the company’s first battery storage project developed for storing power made from renewable sources such as solar and wind power.

Brown said the project is “a revolutionary concept that will very much change the grid in terms of how renewables are integrated.”

Though battery storage technology is relatively new and can be quite expensive, Brown said it’s exciting for power companies to now benefit from both the innovation and the falling costs of this technology.

Chuck Reiss heads the five-member Hinesburg Energy Committee, an advisory group to town officials that also works to educate the public on energy issues. He said the battery installation is important as the state works towards a goal of using  90 percent renewable energy by 2050.

It’s innovation like battery storage, combined with other measures that will help achieve the 90 percent goal. Reiss pointed to continued expansion of solar panels to generate power and installation of more energy-efficient heat pumps to warm and cool homes and buildings across Vermont as ways the state can make the shift.

Reiss acknowledged that the Vermont Electric battery project is “successful in that it is functional,” helping the publicly owned utility keep costs down and making its grid more resilient.

However, Reiss noted that the facility does not directly help individual households beyond the benefits that come from a more resilient grid system. Reiss said he hopes a future project involving battery storage could benefit  individual homes.

Brown said the project is just the beginning of exploring the use and application of battery storage technology. Ultimately, Vermont Electric will continue to learn more about energy storage technologies to better respond at peak times when power is expensive, Brown said.

Although it wasn’t involved in this battery project,  Encore Renewable Energy has worked on battery storage elsewhere in conjunction with its large-scale community solar installations.

Chief Development Officer Derek Moretz points out that the integration of solar into power generation increases the need for storage that battery technology provides.  “Batteries can harness peak solar production and push it into evening hours when it is most valuable,” he said.

Encore’s Chief Executive Officer Chad Farrell  noted that the industry needs to move toward establishing more storage sources close to where energy is generated, such as the Hinesburg battery project. “In the age of climate change, which brings an increasing number of extreme storm events, it is all about resiliency. And the most resilient form of energy is one that is generated at the point of consumption,” Farrell said.

Vermont Electric Cooperative serves about 32,000 members in 75 Vermont communities. It is the largest locally-owned electricity distributor in Vermont. VEC collaborated with project partners WEG Electric Corp. and Ormat technologies to develop and install the battery facility.