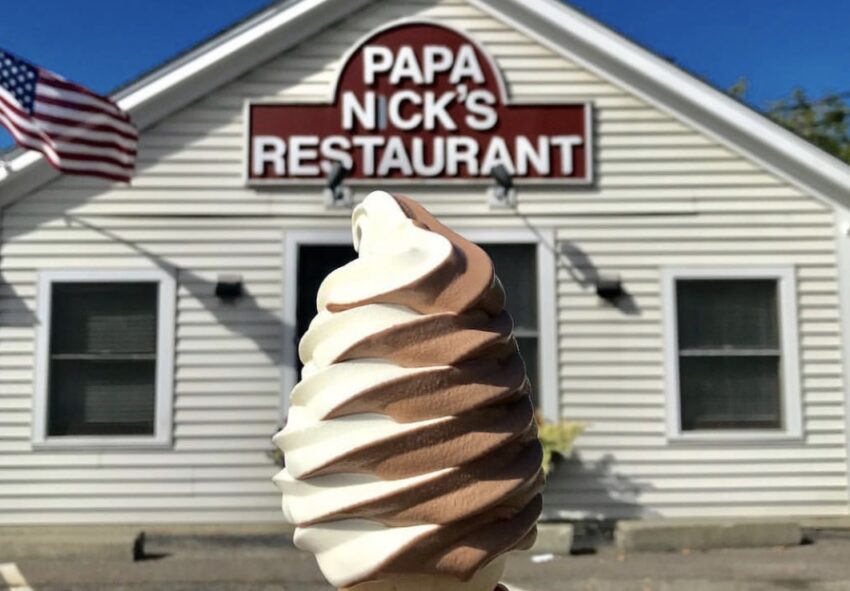 After three decades in Hinesburg, Papa Nick’s remains an integral part of the town, and has adapted to and helped support the community through the COVID-19 pandemic.

The restaurant, owned by Voula Zontanos, has been in Hinesburg since Jan. 14, 1991, Zontanos said. Zontanos has contributed food, money, and time to various local organizations, both before and during the pandemic.

Papa Nick’s is a family-owned establishment that serves a variety of “comfort foods,” from pizzas to hot turkey sandwiches.

The restaurant has not changed much in 30 years, said Voula Zontanos. “We keep going. Even with the hard times, we go through,” she said.

“Everyone works together. I don’t think anyone has a specific role,” said Paula Zontanos, Voula’s daughter, about the restaurant employees. The newest worker, she said, has been with Papa Nick’s for three years, and some employees have worked since it opened in 1991.

Voula Zontanos also connects with the families of her customers.

“I see three generations growing up here. I see, you know, the parents come in with the kids, babies. And I hold them in my hands and they grow up and they have their own family and they come with their own kids,” said Voula Zontanos.

The restaurant is also involved with other organizations and groups in Hinesburg, said Voula Zontanos.

“We are involved with the fire department, with the schools, with the Lions Club, the Vermont Business and the Hinesburg Business Association, and everybody,” she said.

She has served food to the Hinesburg Fire Department, as well as donated to the organization. On July 4 a few years ago, Voula Zontanos received a lifetime award from the department, said her daughter Paula Zontanos.

“[Voula Zontanos has] the biggest restaurant in town, but she supports every other business. She wants everybody to thrive and survive and do well,” said Laurie Brooks, a Papa Nick’s employee who has been a friend of the family for 18 years.

“She really does love serving everybody, you know, in the sense of serving food as well as helping people out,” said Brooks.

The restaurant has adapted and remained involved in the community during the COVID-19 pandemic.

In early May 2020, Papa Nick’s partnered with the Vermont chapter of Frontline Foods to deliver over 80 meals to frontline workers at the UVM Medical Center, according to the restaurant’s Facebook page.

The pandemic’s restrictions have been difficult for Papa Nick’s, because of emphasis on the social interaction that takes place within the restaurant itself, said Brooks. “Nobody has come in here since March the 16th,” she said.
Papa Nick’s has been open only for takeout since then.

“We try to come up with crafty little things to do just because they can’t get what they used to get besides the amazing food,” said Brooks.

The restaurant created an outdoor seating area for the summer and fall, offered pizza kits, weekly specials, movie nights, and followed COVID-19 guidelines in order to give out candy on Halloween outside the restaurant, said Brooks.

“A positive thing is that I believe that we’ve gained a lot of new customers because we did such an amazing job with our outdoor area and it was very comfortable,” she said.

“We left the creemee window open as long as we could, knowing that that was like an outing for people, you know, something for them to do,” said Paula Zontanos.

The restaurant is discussing keeping some aspects of the COVID-specific innovations, like the outdoor seating and the movie nights, when they are able to reopen completely, said Paula Zontanos. “We had to think out of the box and everyone’s been great,” she said.

Suzanne Slesar, a Charlotte resident, has been going to Papa Nick’s for about 30 years.

“I like that Voula, the owner, is there at the front counter when you walk in,” she said. “Voula takes an interest in everyone’s family.”

Her favorite food to get from the restaurant is the hamburger macaroni soup, Slesar said. “My husband is whole foods, plant based, which means he doesn’t eat cheese, so they’ll make a special pizza just for him,” she said.

Though her family never got takeout so frequently before, they now get takeout once a week to support their local businesses, said Slesar. “I would get on [Papa Nick’s] Facebook page every Thursday just to see what the weekend specials were.”

“I think they really went above and beyond customer service, trying to offer some different things for everyone since March,” Slesar said.

The Community News Service is a project of the University of Vermont’s Reporting & Documentary program.