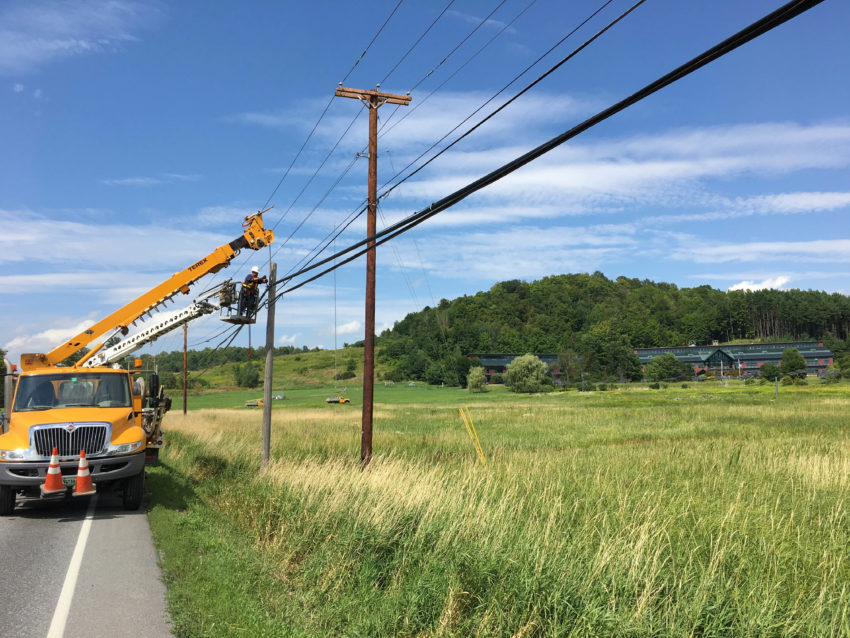 Andrea Morgante used to know every single person who walked past her house. “But now, from about 5:30 in the morning there are different groups of people walking,” she said. “Later, it’s kids going to school and the CVU runners. And in the evening, it’s parents pushing their strollers, couples walking their dogs.”

For 41 years Morgante, 67, has been working to promote a more “walkable” Hinesburg. For 27 of those years, she did so as a member of the selectboard. “Walking is a way to experience all your senses,” she said. “And it’s a great way to meet different people, [to] give a friendly hello.”

Cars, of course, are the dominant way people get around town with more than 10,000 passing through Hinesburg each day, some starting in town, but most passing through. Jon Slason, 37, moved to town about four years ago. “Our decision to live ‘downtown’ — within walking or biking [distance] to the dentist, doctors, grocery store, school, library and sport fields and hiking trails — allows our four-member family to survive on one car,” Slason said. “The luxury of being able to access all these activities within a short 15-minute walk or less is no less than amazing.”

What would it take to make Hinesburg a place where more people could drive less and walk more? Town planners, transportation professionals and citizens have many ideas. Here are some of them.

Morgante points out that people like to walk in places they feel safe, and sidewalks can make a big difference. In the 1980s, sidewalks on both sides of the street between Lantman’s Market and Hinesburg Community School had completely deteriorated. The town fixed those and then built a sidewalk to Kelly’s Field.

But safety is not enough, walks also have to be interesting. In the early 1990s, Morgante wrote a transportation grant that brought the short recreation path from the post office to Mechanicsville Road — re-purposing a bridge from Turkey Lane and adding trees and benches along Patrick Brook.

And currently underway is a sidewalk between Commerce Street and Riggs Road into NRG Systems. A sidewalk between Papa Nick’s Restaurant and Pizza and new housing units just south of the village along Route 116 is coming next.

The biggest and most important upcoming project would put a sidewalk on the north end of town, along CVU Road all the way to the intersection of North Road and Texas Hill, passing by the Triple L Mobile Home Park. An initial study put the cost over $2 million.

Another sign of the town’s support of walkers: the Hinesburg Highway Department plows all the sidewalks in the winter.

Despite Hinesburg’s efforts to increase safe walking, travel in the town is still dominated by cars.

As a result, infrastructure investments often favor car traffic over pedestrians, according to Rolf Kielman, 73, a member of the town’s planning commission and a 35-year town resident. “As a town, we’ve got to stop incentivizing the use of automobiles and switch our attention to incentivizing walking, biking and public transportation. That will require more dense and diverse growth that is configured near the center of our village, with services available to those of all ages,” Kielman said.

People drive due to the distances between home, work, shopping. More housing near town services can allow people to drive less and walk more, Kielman said. The town’s planning commission has been working toward those goals. Several upcoming projects may do just that.

Probably up first, according to town planners, is a new NRG Systems manufacturing plant proposed for the corner of Riggs Road and Route 116. The development review board will devote its entire Sept. 3 meeting to reviewing plans for the plant, which could employ as many as 165 workers.

When it comes to housing, the DRB has given preliminary sketch plan approval to the Hinesburg Center’s second phase, the cluster of houses and businesses off Farmall Drive. Plans call for 82 new housing units in a mix of single-family and multi-family homes and a 39-unit apartment building with offices and businesses. The project still has two more DRB approvals and needs additional water and sewer allocations.

The Haystack Crossing project, between Route 116 and the new soccer fields, is the biggest proposed project in Hinesburg’s future. The massive residential, office and light industrial development calls for 200-plus new living units and a mix of businesses and stores. It also has sketch plan approval, but still needs additional DRB approvals and water and sewer allocations.

To connect these two developments, a new road is planned that would run parallel to Route 116, connecting Shelburne Falls Road with Charlotte Road. The aim would be to reduce traffic on Route 116 and provide a pedestrian path to the library and other businesses at CVU Corners.

There are several other projects in the works that will bring additional housing to Hinesburg’s village, including plans to grow the Meadow Mist project on the south end of the village toward a total of 23 units and plans for 18 more housing units on Mechanicsville Road.

OTHER FORMS OF NON-CAR TRANSPORTATION

A growing number of cyclists in and around Hinesburg commute to work. “Riding to work gives me great joy and keeps in in decent shape,” said Kim Hazelrigg, 61, who rides west of town to her work in Williston most days.

There is a commuter bus that picks up riders behind Hinesburg Town Hall twice in the morning on its way to Burlington. “I like being able to read, doze, chat with others or play games on my phone while on the bus,” said Hinesburg rider Cathy Ryan, who walks to the bus from her home in Lyman Meadows. “It makes time stuck in traffic feel like less of a waste of time.” The bus is $2 each way, but a number of area employers offer free or reduced fares.

LOOKING TO THE FUTURE: TAKING OVER ROUTE 116

Town Meeting Day attendees this spring engaged in a long discussion about modifying the crosswalk near Lantman’s store exit. Hinesburg has little say on it because state transportation engineers control what happens on Route 116, selectboard Chair Phil Pouech explained, pointing out that the transportation agency has pushed back on requests for crosswalks, street trees, speed limit changes and other traffic calming or walker enhancements. “The state transportation department’s priority is to move vehicle traffic quickly, which conflicts with Hinesburg’s priority of a safe and walkable village,” Pouech said. Instead, Pouech would like to revisit the idea of Hinesburg taking over Route 116 through the village. “I expect there will [be] some additional cost to the town, but the improved quality of life and safety may be well worth it,” Pouech said.