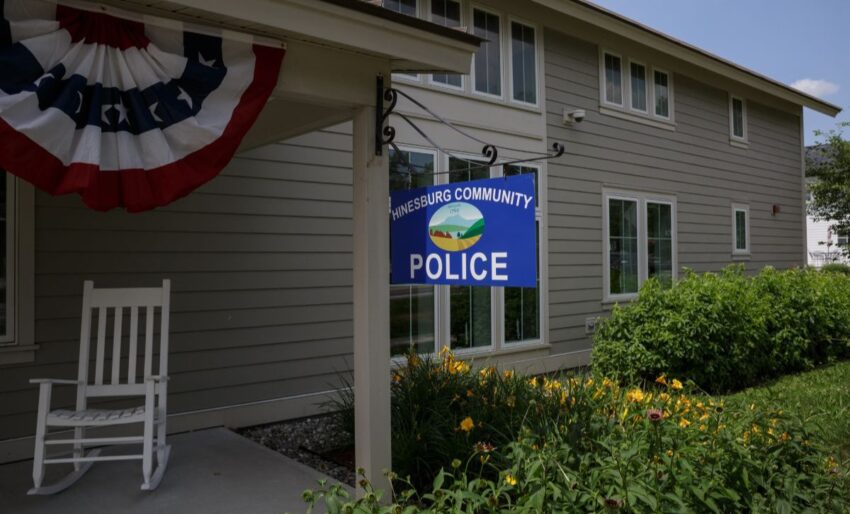 Editor’s Note: A previous version of this story did not fully describe the manner in which Jeff Tobrocke resigned from the Hinesburg selectboard in September. Tobrocke had sent an email containing ad hominem attacks against a town official prior to his resignation, which colleagues had condemned and led to the board drafting a censure resolution.

In the wake of national protests calling to defund the police following the murder of George Floyd, Hinesburg will increase the town police budget, with the selectboard voting to hire another full-time police officer using town funds and a federal grant.

Selectboard members have expressed their support for their police department, but questioned the sudden need for a new officer. The decision also prompted the resignation of a selectboard member following disagreements among board members about the SRO position and racial equity in the town.

As the town continued with plans to expand the police department, students at CVU who are Black, Indigenous and People of Color expressed their fear of and discomfort with police presence.

When the opportunity to apply for the federal Community Oriented Policing Services (COPS) grant emerged, selectboard member Merrily Lovell asked if there was a prior plan to hire a new officer in the coming year. Sergeant Caleb Casco, who presented the opportunity to the board, said there was nothing in the approved budget to do so.

“The budget is set. We worked really hard to get it in a reasonable increase. Where’s the money tree that we’re gonna go get this extra money from?” said Lovell.

Vermont’s cities and towns vary substantially when it comes to local police spending.

In Dover, each resident spends an average of $623 on police per year while in Peacham the entire annual budget totals to $250. This data has been compiled by VTDigger and the University of Vermont’s Legistlative Research Center.

Not every town plans to increase their police spending. In June, Burlington passed a resolution reducing the police budget by 30 percent, and since then Burlingtonians have been pushing for community control of the police.

The Hinesburg FY21 approved police budget is $606,783 representing 14.5 percent of the total town budget and a $32,393 increase from the previous year.

Selectboard Chair Phil Pouech estimated the total cost to the town at $100,000.

Hinesburg will only receive the grant money if the new position is carried into the fourth year, bringing the total additional cost to at least $183,000 over the next four years.

“This is a support of a value, that we want to have a strong, vital community police department” said Selectboard member Aaron Kimball at the February meeting when board members voted to apply for the grant.

While Pouech voted to accept the grant in July, he voted against applying for it in February.

“I would prefer to go to the town at a town meeting and ask ‘Do we want to do this?’ But there wasn’t really any time,” he said. “So I didn’t vote for it for that reason because I knew it would increase our budget.”

The COPS program was established as part of the 1994 crime bill and is overseen by the U.S. Department of Justice.

Attorney General William Barr announced that nearly $400 million would be awarded in FY2020 under the COPS hiring program to fund 2,732 additional full-time police officers in 596 law enforcement agencies across the nation. Ten grants were awarded to Vermont agencies.

Hinesburg also received a COPS grant in 2010. Over the three-year grant period, the police budget increased by $91,904. In 2014, police salary spending increased by $50,818 due to the loss of the COPS grant revenue.

Andrea Morgante, who served on the selectboard for 27 years, said that additional costs of equipment — things like the uniform, firearms, training and vehicles — were not always considered in hiring discussions.

Morgante was shocked that Chief Cambridge proposed funding another full-time officer for the Hinesburg community.

“The way in which we rely on our neighbors is the fabric of the community,” Morgante said. “Community is defined by that more than by having ‘Community Police.’”

Rob Bast, who was on the board for about 20 years and led efforts to establish the department in the early 1990s, said “Were I still on the selectboard, the question would be: ‘okay, well why do we need this? What are we doing with this officer?’”

“Is this going to be a permanent addition to the police force? How do we justify this over the long term?” he said.

When the Hinesburg Community Police Department was established, Morgante and Bast were both on the selectboard. Morgante said the biggest issues expressed publicly were concerns of speeding and traffic. “We needed a traffic cop, somebody to patrol the roads and stop speeders,” she added.

Hinesburg changed in the years following the establishment of the police department. “It gradually became expected that if you had a problem, you would call the police as opposed to trying to resolve things on your own with your neighbor,” Morgante said. “Even if it’s just barking dogs or neighbor’s trash.”

Hinesburg has experienced significant growth. It is now a town of 4,554 people that currently has 5 full-time police officers including the chief with an additional 3 part-time officers.

Crime reported in past issues of The Hinesburg Record has largely been non-violent, but according to Bast, “there’s a whole lot more domestic abuse than anyone would like to believe.”

Morgante said that many of the issues police are called to address would be better handled by social workers.

“If we were to design a system from scratch for services for a town, it probably wouldn’t look like it looks today,” Pouech said. “We’re sort of stuck with how things develop and grow in systems that exist.”

This October, the town agreed to a six-month trial of a partnership with the Howard Center, which cost half the annual $7,151 fee for year-long partnerships.

While the hundreds—or thousands—of protesters this summer have stopped marching in the streets, their presence remains in conversations about the role of police in communities.

When the selectboard voted to accept the COPS grant this July, Jeff Tobrocke was the lone dissenting vote, voicing concern that it may not be the right time to expand the force.

Tobrocke has since resigned from the board in September after writing an email containing ad hominem attacks against a town official during racial equity discussions, leading to the board drafting a censure resolution against him.

Tobrocke expressed regret for the message, though maintains he left due to what he sees as ambivalence to student testimony about fear and discomfort around local police. He hopes to make a greater impact by collaborating with CVU students in the Social Justice Alliance.

During a town racial equity working group meeting in September, CVU librarian Christina Deeley presented a statement written by students: “The creation of the position of SRO was reactionary and was put in place with the thought of security and not the adverse impact on student emotional wellbeing. Placing a visibly armed SRO in the building creates a culture of anxiety and uncertainty.”

The AMA has stated that increased police presence causes adverse health outcomes, especially for BIPOC and other marginalized groups.

Deeley said students support reallocating money for a trained trauma specialist and to implement restorative justice practices at the school.

In his resignation letter, Tobrocke recounted that during the racial equity meeting in September, BIPOC students voiced distrust, unease and fear of police presence in schools and the community.

Black students expressed that due to their fear of the Hinesburg police, they take the bus to school from Williston instead of driving.

Black men are 3 times more likely to be killed during a police encounter than their white counterparts. Racial disparities in policing and incarceration are evident in Vermont, where Black people make up about 9 percent of the prison population but only about 1 percent of the state population.

Tobrocke said that after students took substantial risks to share their stories, the lack of response by the town leadership invalidated their lived experiences.

“At a time when towns across the country are looking at appropriate policing levels and budgets, our out of touch town leadership has added an unneeded officer at a huge expense,” he said.

The Community News Service is a project of the University of Vermont’s Reporting and Documentary Storytelling program.