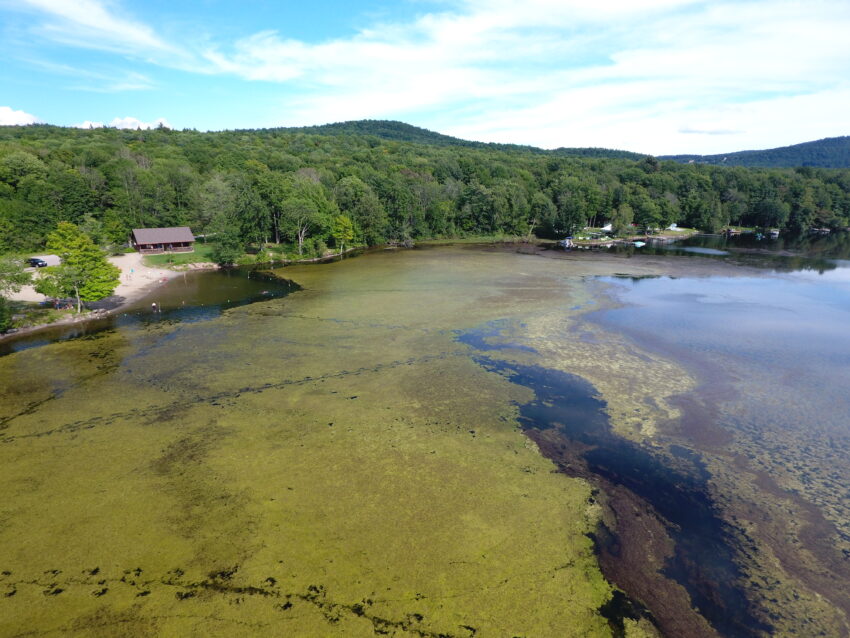 On February 8, 2021, the Vermont Department of Environmental Conservation (DEC) approved a permit to use the chemical herbicide ProcellaCOR to treat invasive milfoil in Lake Iroquois.

The Lake Iroquois Association (LIA) and the Lake Iroquois Recreation District (LIRD) jointly filed an Aquatic Nuisance Control Permit Application with the Vermont Department of Environmental Conservation (DEC) on March 3, 2020. Almost a year later, they received the affirmative response they’ve been waiting for.

The approval follows a 2018 request by LIA to use the herbicide Sonar in Lake Iroquois which was denied.

Pat Suozzi, former LIA president and current secretary, reported experiencing a feeling of relief when the permit was approved. “This means a lot to the LIA and LIRD,” said Suozzi. “It’s been seven years in the making, and hopefully, this approval will allow us to really deal with the problem.”

The treatment will be administered to Lake Iroquois on June 28 by SOLitude Lake Management, a Massachusetts company that has treated a number of Vermont lakes. Someone from the Vermont Department of Agriculture will meet them in the early morning to oversee the process. The Vermont Department of Agriculture pesticide inspector will be notified and will inspect the boat and the herbicide application mechanisms before treatment is underway.

The littoral zone in the northern part of the lake has been designated for treatment this year as the milfoil is dense in that location. Littoral zones are near the shore and shallow, and are the only places where the chemical will be used as this is where plants grow.

ProcellaCOR is not sprayed but injected, which allows for precise treatment. The dosage is minuscule, amounting to less than 12 percent of the amount allowed in drinking water. The rate of application will result in no more than .47 parts per billion (PPB) lakewide. With a half-life of .07 days (1.68 hours), ProcellaCOR is not expected to be detectable in the water within 24 hours of treatment. The LIA and LIRD are only permitted to treat 40 percent of the littoral zone (less than 40 acres out of 100).

There are no restrictions on water use with this particular herbicide, but it is recommended that the lake not be used on the day of treatment. There are minor restrictions on irrigating lawns with lake water for the first few days following the treatment.

Misha Cetner oversees the Lakes and Ponds Program regulatory group and was the permit analyst for the Aquatic Nuisance Control permit. In an email, she wrote that ProcellaCOR “is highly targeted to controlling Eurasian watermilfoil while beneficial native aquatic plant species are largely unimpacted.”

Cetner went on, “a key difference between this permit and the previous denial for an herbicide treatment in Lake Iroquois is that ProcellaCOR can be used to target specific areas of dense Eurasian watermilfoil to control where the herbicide typically breaks down within days, whereas Sonar was semi-targeted to controlling Eurasian watermilfoil at low concentrations where that type of treatment required a concentration of the herbicide to be maintained throughout the entire waterbody for up to several months during the late spring/early summer.”

The DEC no longer issues permits for the use of Sonar.

Not everyone agrees that the use of herbicides is the best solution. Meg Handler is a Hinesburg resident and was a member of the LIA when they voted on whether to request permission from the state to use Sonar. She opposes herbicide use in the lake, a position that put her in the minority.

“It went against everything I was told,” said Handler. “All our efforts to keep the lake chemical-free, and now we were looking at it as a solution to this ‘problem?’”

Handler said she was told by the LIA that once the board applied for the permit, she could not publicly speak out against it. The LIA disagreed with that characterization.

Handler left the board soon after and helped organize a local group of individuals who opposed the herbicide. “It was really a citizen’s grassroots effort. We all had to educate ourselves on the topic and, in the end, it was our skepticism and research that led the DEC to change their policies state-wide.”

Handler believes the LIA applied for the permit without sufficient research or evidence of the chemical’s safety. “It’s important to note that, had the LIA gotten permission to apply Sonar to Lake Iroquois, they would have used it,” said Handler.

Jeff Davis, chair of the LIRD board, expressed confidence in this approved treatment to reduce milfoil, based on the success seen in other Vermont lakes. “Three to four lakes were treated with ProcellaCOR last year and quite a few were approved for this summer,” said Davis.

After the 2018 denial of the permit, the LIA sought out other mitigation strategies for removing milfoil from the lake. To remedy the swim-area watermilfoil infestation, they enlisted divers to go down and remove it by hand from its roots at the bottom of the lake. This is now a funded program called Diver Assisted Suction Harvesting (DASH). They also put benthic barrier mats down on top of the weeds, which kill the vegetation by blocking its access to sunlight. Because both of these efforts require volunteers, the association did not deploy these mitigation strategies in 2020 due to the challenges posed by COVID-19.

According to Suozzi and Davis, the milfoil infestation is too dense to control all by hand, which makes this approval crucial to the mitigation process. The LIA plans to run its DASH program this summer, and use this mitigation strategy to control for regrowth, although Davis admits uncertainty that DASH will be enough.

“It’s like a game of whac-a-mole,” Davis said. He does not rule out the possible need for additional chemical treatments in the future.

Handler, however, stressed milfoil’s status as a nuisance weed. “It’s inconvenient for humans who want to recreate in the lake.”

She suggested that, before applying for a permit, associations like the LIA should be required to address shoreline erosion, runoff from roads, excessive boat use, inappropriate boat use, and the transportation of invasive species from lake to lake.

The LIA and LIRD are currently running programs that address these concerns. Jeff Davis is involved in Beebe Lane road improvements with the goal of improving runoff and reducing a big source of sediment into the lake.

There are three main sources of income for projects like these: grants, towns, and donations. The total cost is still being estimated, but Suozzi thinks it will come to about $64,000-$65,000 this year. The Beebe Lane road improvements rely on grants, whereas the herbicide treatment project is relying on donations. There is no town money going towards the herbicide treatment.

ProcellaCOR is scheduled to be administered at the designated parts of Lake Iroquois on June 28. The Lake Iroquois Association will inform residents of any necessary details about the treatment by mail in advance.