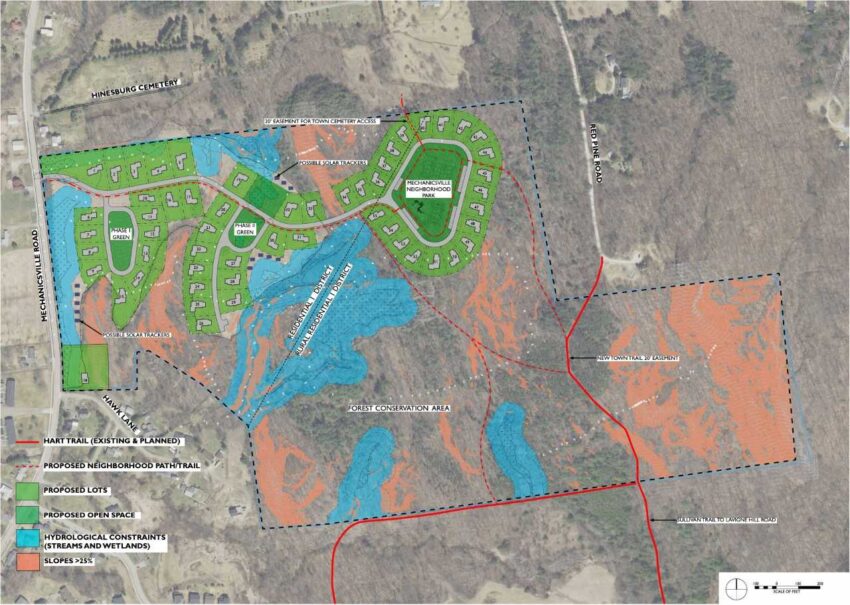 A plan for one of Hinesburg’s largest-ever housing development projects will begin to make its way through a years-long vetting process.

The 106 acre property is on the east side of Mechanicsville Road, and new property-owner Joe Laster — head of Atlanta-based Abraham Properties — has ground-breaking plans for the plot.

The project would develop the land into a 55-unit subdivision with three neighborhood parks and expanded walking trails. The development would include some solar, according to the publicly available plans. Laster said he would be available for an interview in early August.

This major subdivision would be established in Hinesburg’s village area, where the 176 unit Haystack Development, Hinesburg’s most sizable development, is in its first stage of the building process.

Hinesburg’s Development Review Coordinator, Mitch Cypes, said the push to develop the town’s village area has been in the works for quite a while.

“Hinesburg has done a lot of work for I would even say more than a decade, maybe even two decades of work, coming up with a town plan to try to encourage development of the village area while preserving the agricultural and forested areas in more rural areas of town,” said Cypes.

Cypes explained that concentrating the developments within the village area works to minimize the development’s impact on these sites of fragile ecology. “This is pretty much the epitome of smart growth,” said Cypes.

Cypes has been in contact with Laster about the Mechanicsville Road project since 2018, the year before Laster purchased the property from previous owner, Poly Quinn.

Cypes shared that before the proposed construction begins, the development must undergo a three-staged review process, which will take about two years. The development is in stage one, the sketch plan phase.

According to Cypes, the input from the Affordable Housing Committee as well as the Trails Committee, is integral to the development review process.

“By regulation, they need to provide 10% of the development to affordable housing. And basically if they’re doing 55 units. Six of those units would have to be able to meet the criteria of affordable housing,” said Cypes.

The Trails Committee has been working with landowners in the area to develop a plan about the connecting trails detailed in the proposal, said Cypes.