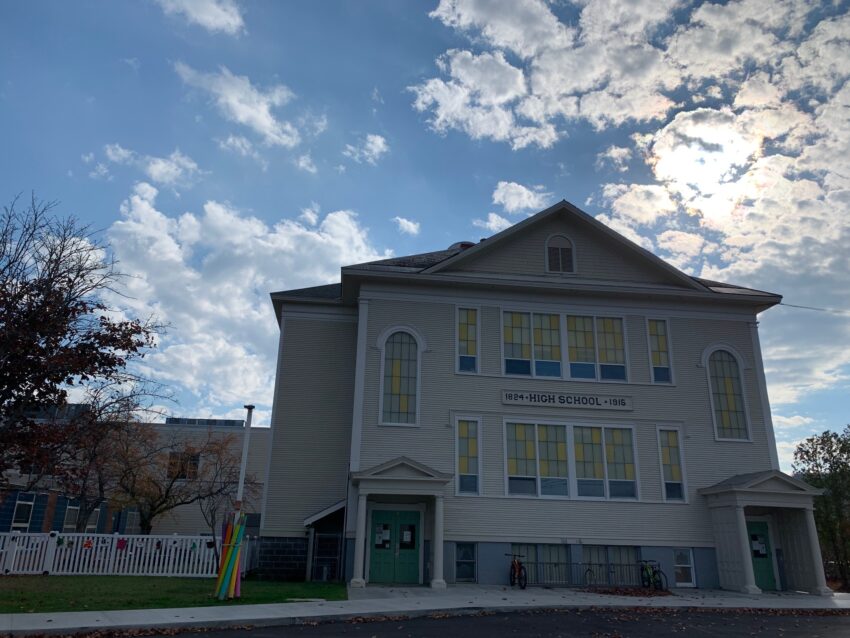 Over 60 people attended the school board meeting Tuesday, many to voice those concerns. Parents say students at Hinesburg Community School are getting less live instruction on remote days than the other middle schoolers in the district. District leaders say all the schools were ready for a typical year, but that this has been complicated by the COVID-19 pandemic, so they are looking at ways to re-allocate teachers’ time among other solutions.

Several next steps were proposed — in both the near and long-term — including a satisfaction survey, more community meetings, and a possible merger of Hinesburg Community School and Charlotte Central School.

Parents’ estimates for how much remote live instruction per remote day their children were receiving at HCS varied from anywhere between zero to 90 minutes. Several people in the meeting asked for a breakdown of how many minutes are being spent on live instruction in each school.

“My fifth grader is currently being taught by an unlicensed paraprofessional while her teacher is on sick leave for multiple weeks. And so there is less than 30 minutes of remote instruction happening for my kid on remote days,” said Christine Deeley, a Hinesburg parent.

Parents also pushed back on the idea of assigning more work for students to complete alone in lieu of live instruction time.

“Kids need frequent feedback. They need social learning. They need face time with teachers. They need someone walking them through the process,” said Becky Alford, parent to a 3rd and 6th grader at HCS. Parents also pointed out resource-strapped, remote schools deeply affect students, but also parents and teachers.

Despite the concerns, many of the parents expressed gratitude for the work that teachers and administrators have been doing. Stacy Riley, a Hinesburg parent said, “I applaud the teachers at Hinesburg. I applaud John and Suzan. I just think we can be doing better.”

Meghan Metzler, a Charlotte parent, said there is a similar trend at Charlotte Central School.

“I have a third grader in Charlotte Central School as well as a seventh grader, and my third grader did not have any live learning at all on Mondays or Tuesdays. And as of October 20th, she’s only had two days where she has had any type of live interaction on Wednesdays, which is a three, 30 minute morning meeting and then a fifteen minute grammar lesson,” she said.

Elaine Pinckney, CVSD superintendent, said the administration was not aware that parents were concerned about the issue until they began receiving emails a few weeks ago.

“I think that we’ve been totally transparent, I don’t think that the issue of how many minutes there were for any particular thing ever came up until then,” she said.

Pinckney, Jeff Evans, the director of learning and innovation, and the middle level principals in the district spoke. Pinckney particularly focused on the ideas of equity and autonomy.

Evans said that the problem is due to teacher ratios. The smaller schools have three teacher teams instead of four teacher teams, which means they are not easily divided into remote and in-person instructors, he said. The ratio is the same, but the hybrid model complicates that fact.

“The three teacher teams really mean that we have to decide where we prioritize. Because we’re three teacher teams, it has allowed us in a way to prioritize in-school learning, which means at Hinesburg the student staff ratio is smaller in fifth through eighth grade than you’re gonna see elsewhere in the district,” said John Pontius, HCS co-principal.

Another challenge Pontius described was the lack of walls that open in HCS.

“The reality is we were resourced and staffed for one reality and now we’re facing a very different one,” said Evans.

Pinckney, Pontius, and the other middle level teachers emphasized the concept of equity, and the work that has been done to ensure that all the students are doing the same amount of level of schoolwork across the different towns.

Jaqueline Parks, Williston Central School principal, said, “I think that’s the case as it is across all of the middle schools, that there’s different challenges based on the resources that we have, the human resources, the physical resources.”

Lynne Jaunich, the chair of the school board, and Josilyn Adams, a school board director, both brought up the idea of combining HCS and Charlotte Central School as a long-term solution.

Adams also asked, “So for next year, will our incoming freshmen, regardless of town, be coming in at the same spot?”

In response, Evans said that the students in grades kindergarten through eight are currently being assessed in order to ascertain “where our students are relative to are our learning expectations.”

Multiple parents brought up the idea of circulating parent satisfaction surveys, an idea that Jaunich supported at the end of the meeting. Many also emphasized the importance of workable, creative solutions.

According to Pinckney, Pontius and his middle level staff had a meeting Wednesday Oct 21 in order to begin finding solutions.

“Whereas the parents seem to think that it’s an issue of, there aren’t enough people, it’s probably more an internal issue of how they organize the day and who does what,” she said.

Pinckney talked about creative solutions as well, including using CVU as a model and looking into making connections with nonprofit groups.

“We just need to think about how we might do it differently and better,” she said.

Pontius also said that he is holding a community forum Nov. 5 about the hybrid model in Hinesburg.