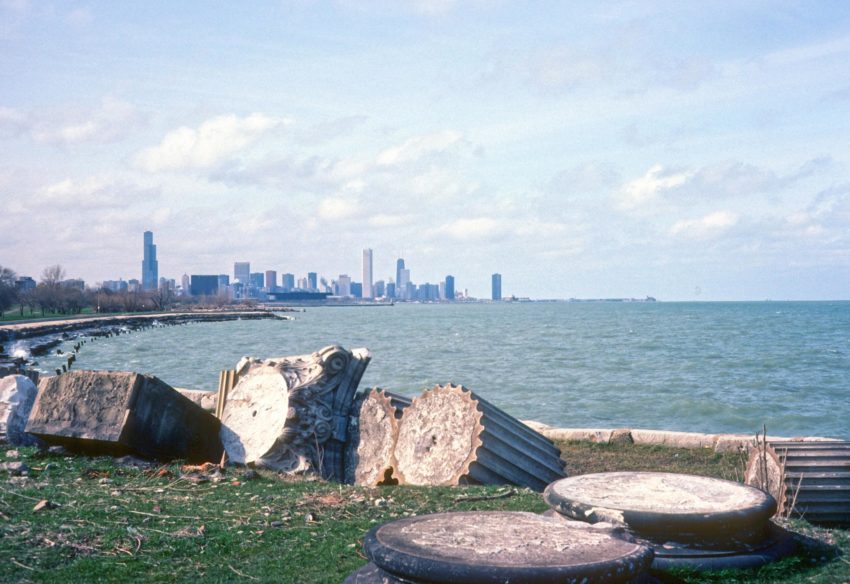 Of all things that might be coveted as worthy garden ornaments, my favorite are ordinary flagstones worked from Vermont quarries. The state once boasted a high number of thriving quarry centers that harvested granite, marble, slate, limestone and soapstone that had a slippery feel. Their perishable-resistant signature rock debris piles served other purposes when spread along transportation routes. Fill material today is crushed stone. Early quarry debris ranged in size from multi-ton blocks to that which could be picked up. Invariably these bore the tool marks of the trade — saw cuts, chisel, peg and drill holes. The telltale linear pattern of halved drill holes along the straight side of quarried rock often preserves a perfectly scalloped surface.

The tool marks add character to an otherwise sought-after sample of quality stone. Sediment horizontally layered by gravity, and pressure-cooked by other forces of nature over millions of years yields flat stones, as do pieces that were squared off by saws in the stone sheds. A flat stone from a quarry will lay in the garden as if in repose face up with traces of tool work like beauty marks that tell the whole story. I prefer the silent ambiguity of the natural and industrial ages to voiceless run-of-the-mill garden gnomes.

How can one not be impressed by the natural wave ripple pattern found on an exposed slab of Vermont’s celebrated red Monkton quartzite that mimics the same kind of ripples in sandy shallows today, but which was frozen permanently in rock formed 500 million years ago. There’s the whales’ tails on Interstate 89, named “Reverence” in respect for all of nature by the sculpture artist James Sardonis, which began as a 36-ton block of African black granite. Or consider the installation of the Earth Clock in 2006 creating a Stonehenge-like circle at Oak Ledge Park in Burlington.

Still, I’m in as much awe of a cast-off chunk of rock with tool marks from a Vermont quarry as I am of a finished stone sculpture on display. The appeal is like that of unfinished, roughhewn wood. When viewing statuary, the story is over. In looking at a sizable piece of discarded, quarried rock, more questions than answers come to mind.

Burlington’s Bike Path appears to be a success for a host of reasons. Most fascinating though is the stretch of path from Colchester Point to Allen Point in South Hero. Treading the three-mile rail to the trail causeway is akin to walking on water. The old railroad bed bore the Island Line, but before a train could roll on the tracks, marble quarry debris, a.k.a. “the long fill,” had to be put in place at the turn of the last century. The railroads enabled Vermont quarries to be profitable by first moving the rock to stone sheds to be finished, then on to capital project sites around the country. I’m just as excited passing by huge scalloped blocks of rejected marble half in the water as I would be walking through the partially submerged ruins of an ancient city-state on the eastern Mediterranean Sea coast. It recalls textbook images of those fluted sections of tumbled down Doric columns.

Granite from various Vermont quarries differed in color, appearance and properties such as hardness which amounted to selling points that fit specific applications. Bethel White from Hardwick excelled as architectural stone. The national appetite for Vermont granite for buildings was made practically mandatory by the 1893 Chicago World’s Fair and its famous White City (“From Hardwick to the Nation,” Paul Heller, Burlington Free Press, April 8, 2018).

The boom peaked in the first quarter of the last century. Structural steel enabled the design of lighter, taller buildings. Walls of glass replaced ornately carved granite installations, and a new architectural style of less granite took hold. Barre Gray granite has long fit the memorial and monument niche. Rock of Ages is still in business today. The legend on the reverse side of one antique postcard claims “Barre as the Granite Center of the World.” Another touts the Rock of Ages quarry as the “world’s largest granite quarry at 350 feet deep and 20 acres carved out of a mountain top.” St. Jude Church here in Hinesburg installed its life-sized outdoor statute of the patron saint carved from Barre Gray granite in 2003. (“New Artwork at St. Jude Church,” Hinesburg Record, Feb. 1, 2003.)

Another familiar, often pictured monument also carved from Barre Gray granite is the 15-ton Samuel de Champlain monument owned by and installed in the town of Isle La Motte. The monument project was finished in exhibition at the Vermont Pavilion at Expo 67 in Montreal by famed Barre sculptor Ferdinand Weber who started with a donated 35-ton granite block.

Barre’s cemeteries are unique in having granite history, monuments and sculpting coming together in one form. A fracas between the socialists and the anarchists that occurred inside Barre’s famed Labor Hall (one of only 12 National Historic Labor Landmarks in the country) on Oct. 3, 1903 resulted in the death of Elia Corti by gunshot. Needless to say, these were anxious times. Over the entrance to the Labor Hall, which opened in 1900, appears the carved arm and hammer medallion along with the initials SLP for the Socialist Labor Party. Elia Corti’s monument in Barre’s Hope Cemetery is a work of art. The details carved relief-like into the granite block include the tools of his trade: mallet, calipers, square, and pneumatic hammer. (“The Italian Job,” by Robin Ray, Seven Days, Nov. 5, 2003.)Vermont rock quarrying was highly competitive. Not only was the quality of rock important but so was the manner in which it was quarried. The open-air Barre quarry shut down in winter. Underground quarries continue to operate year-round such as Danby Quarry. The Vermont Marble Company operated several quarries in Rutland, West Rutland and Proctor. At the height of the depression in 1935, the economy forced reduced wages, reduced work days, layoffs, labor unrest and strikes. In one underground quarry, which invariably completely flooded soon after, it’s rumored that the tools still lie where the striking workers left them.

Quarry tool marks are apparent even on finished sculptures. “The Amphibian,” a very large slab of Barre Gray granite placed upright on the waterfront in Burlington, looks more an angular side silhouette of a human head facing Lake Champlain than an amphibian in appearance. The sculpture has an oversized round perforation for a single eye, which seems stiffened by the presence of a half open channel in the stone made by the quarry drill. (“Amphibian” by Jerry Williams was produced after the 1991 International Sculpture Symposium at Williams Studio in Barre.)