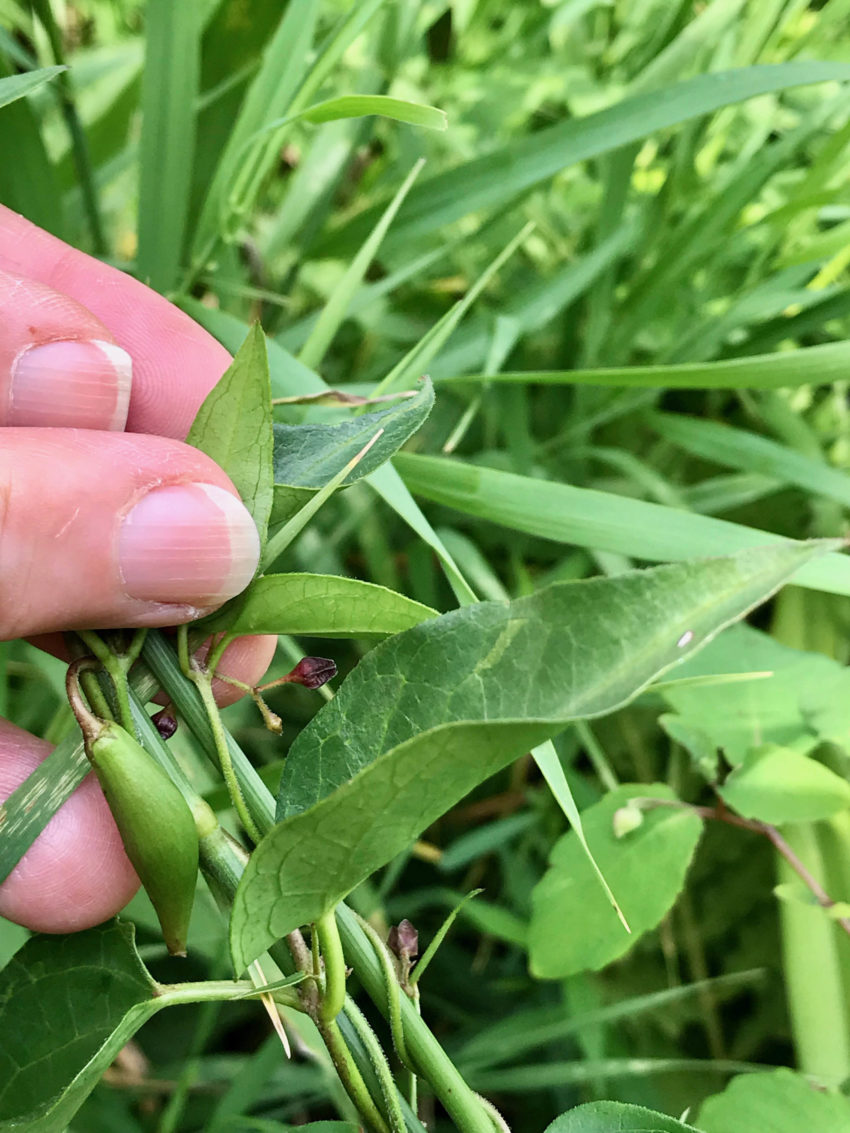 Though there are many invasive plants common to Vermont, some species have flown under the radar. These uncommon species are considered “early detection plants.” One uncommon invasive plant is swallowwort.

When I moved to Hinesburg 28 years ago, I discovered two small vines. I tried digging them up, but to no avail — the roots were too deep. Not knowing they were swallowwort, an invasive plant, it was ten years later when they caught my attention again. The lower limbs of my cedar tree had died, and upon investigation, I discovered more of these sinuous vines under the tree strangling the branches! Determined to remove them, I tried a dose of Roundup, but it resisted even that. Each year, I’d find more vines despite my efforts. Then, for a period of time, the gardens were left unattended.

Five years ago, I returned to the gardens, and found that the swallowwort (still an unknown plant to me) had spread to eight new locations. Furiously, I dove into plant identification books and articles online. Once I knew the name, a whole backstory came to life — from Canada to Pennsylvania and beyond, gardeners and landowners lamented the presence and impact of this innocuous looking vine.

“Nothing else grows, not even grass”

Swallowwort is two species (black and pale: botanical names Vincetoxicum nigrum and Vincetoxicum rossicum). Only black swallowwort has been reported in Vermont. Other names for these plants include black dog-strangling vine or Louise’s swallow-wort. It grows in any soil conditions (forests, meadows, marshlands and roadsides). You can spot shoots in spring, growing vertically until collapsing under its own weight. Trying to stay upright, it latches onto nearby plants or creeps along the ground, twisting and climbing over anything in its path. Look closely and you’ll see the leaves grow opposite each other along the stem, and are oval shaped, with a dark green sheen. Tiny, deep purple (black) or light pink (pale) star-shaped flowers give way in late summer to seed pods akin to those of milkweed, only smaller.

I and others are concerned about the presence of this plant for reasons beyond a few dead cedar branches. Swallowwort reduces biodiversity of native plants, invertebrates, AND vertebrates! The vines release chemicals hindering growth in other plants, reduce the integrity of important habitats like grasslands, choke out new growth in forests, and spread along roadsides. These chemicals can repel or kill native herbivorous insects and mammals. Of particular note are its impacts to monarch butterflies. Adult monarchs mistake swallowwort for milkweed, lay eggs on it, and when hatched the caterpillars are unable to eat or are poisoned by the swallowwort and die.

Through my research I found this article by Julie West of Henderson, New York:

“I want to give you an idea of what it’s like when swallowwort invades. To me, it’s like my land has cancer and I feel an overwhelming sense of helplessness as I watch it spread.

“When swallowwort takes over an open field, there are no more wildflowers.”

“No daisies, milkweed, dandelions, Queen Anne’s lace, not even chicory or thistles. It can climb eight to 10 feet high. It will smother and kill [shrubs]. Swallowwort is so aggressive here in Henderson that this took just a few short years.

“Swallowwort has no natural enemies to control its spread. The plants show no sign of damage from insects, and there is no indication that deer or any other animals eat it. Swallowwort can only be controlled when it is recognized early and it is still just a plant here and a plant there.”

Sound bleak? I’ve also found in my research success stories and reasons for hope. There are things we can all do, that you can do, to help.

First and foremost, be on the lookout for new plants on your property that you don’t recognize. The key is to encourage ourselves and others to identify those unknown plants. For this early detection of swallowwort, we can all learn how to identify it so we can take action while it’s in the early stages of establishment (vtinvasives.org/invasive/swallowwort-black).

“Swallowwort can only be controlled when it is recognized early and it is still just a plant here and a plant there.”

We can learn how to control the spread. New growth is fairly easy to dig up. The plant also spreads by seed, so cut off flowers or pluck seed pods, but be sure not to compost or otherwise risk it spreading to other parts of your yard! You can cut this plant to ground level, starving the roots and hindering its spread. Pulling/burning only encourages vigorous growth and digging older plants is difficult because the roots are deep and will break.

Never mow or Brush Hog an invasive when it has gone to seed. Herbicide treatment can be effective in some instances, but it requires continued application over several years.

Small groups of organized people can have a huge positive impact. In Ogunquit, Maine, a local committee has successfully held pod-picking days as part of their work to remove the population of swallowwort. Though the plants have been there for over 20 years, eight annual picking days have removed over 6,000 pounds of pods, all which otherwise would have seeded and continued the spread of the plants. Each year, there is less to pick (which in this case is a good thing)! The group’s motto is “little by little, a little becomes a lot!” The group is motivated by their passion to protect the monarch butterfly, and keep pollinator-friendly vegetation thriving along the coastal parts of town.

My hope is that these stories of struggle against the devastating effects of this invasive plant paired with stories of success will lead to education and action. Hopefully, we can all take steps to control its spread, while we look for ways to restore our gardens and native habitats.

Be on the lookout!

If you find swallowwort, please take pictures and report it here: vtinvasives.org/get-involved/report-it.