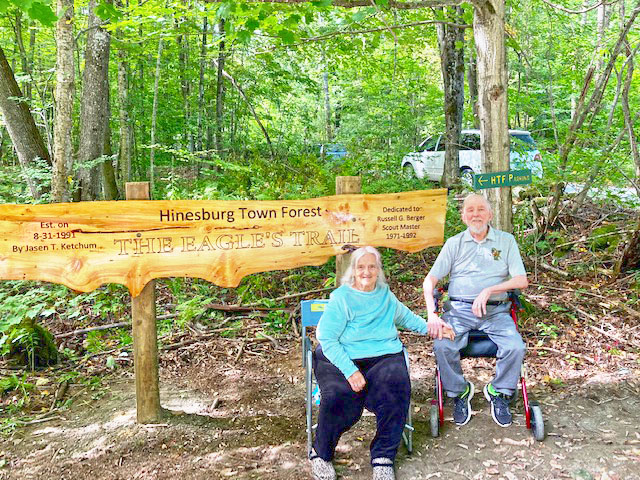 On a warm sunny day in September, a new replacement Eagles Trail sign was revealed to former Scoutmaster Russell Berger as he was surrounded by family. At the Town Forest trail entrance at Hayden Hill East, hikers and community members are now greeted with the familiar trail and a freshly minted sign: Hinesburg Town Forest, the Eagles Trail. A sign that is, in fact, a replica of one that Eagle Scout Jasen Ketchum carved and wood burned over three decades prior.

The afternoon brought reflection of the debut of the Eagles Trail that originated over 30 years ago, in a time when the Boy Scout Troop 690 frequently met and spent time in the Hinesburg Town Forest. So much time, in fact, that the Town Selectboard granted permission to the troop to establish a campsite within the area for their outdoor skill learning and adventures.

Under the guidance of Scoutmaster Berger and various dedicated assistant leaders, the Boy Scouts hiked, camped and learned many necessary skills for outdoor survival. A good amount of time was dedicated to orienteering or map and compass training at this location in the Hinesburg Town Forest. The troop also planted a grove of red pines, which later became identified as Lovering’s Corridor in the initial Eagles Trail Map. This held great significance as it was named in dedication to Assistant Scout Leader David Lovering, who had since passed away. The corridor of red pine was a beautiful and serene area along the original route of the Eagles Trail.

Amid the camping, hiking and skill training, Jasen Ketchum formed his Eagle Scout project: the creation of the Eagles Trail. This project had all the desired qualities of an Eagle Scout project. In order to achieve the ranking, Ketchum needed to provide or contribute to a community service project that would be beneficial for years. This project would need to be defined and completed by the scout himself, from initial concept all the way through to the finished project.

Ketchum’s project was thoughtfully and thoroughly planned. The Eagles Trail was a three-mile loop that began at Hayden Hill East, which at the time was the most accessible location that included a small parking area. Ketchum planned the best looped route to take. His primary concerns were safety, avoiding areas that could easily erode, as well as ensuring the land would not be negatively impacted. There were aesthetic considerations, too, like natural formations or scenic spots that would enhance the hiker’s experience on the trail.

Once the route was established the physical work of trail-building began. Using advice from the Long Trail Organization, a working crew helped to clear the path and build the trail — a process that took roughly six months. A detailed trail description was written and pamphlets were designed and printed. Pamphlets were available at the town clerk office so that the Hinesburg community could enjoy the Eagles Trail and all that the forest had to offer.

Berger was scoutmaster of Troop 690 for 21 years. Over two decades, he and several assistant leaders supported countless scouts. Together they canoed, hiked, camped, spelunked caves and winter camped. They also swam, cooked, practiced orienteering, trained for wilderness survival and various other outdoor skills.

The troop traveled beyond their local community to exercise their scouting skills as well. They took trips to Ontario, Northern Maine, Kentucky, Pennsylvania and New York and various other wilderness areas within Vermont.

Berger was proud on this sunny Saturday occasion. He reminisced on the good times and meaningful experiences that scouting brought to many boys and community members. He remains grateful that he was able to provide Troop 690 with these experiences alongside wonderful co-leaders: Dave Lovering, Paul Emmons, Joe Emmons, Steve Aube, Gary Carpenter, Leon Lestage and others throughout the decades. A good day of reflection, recognition and a renewed trail sign!