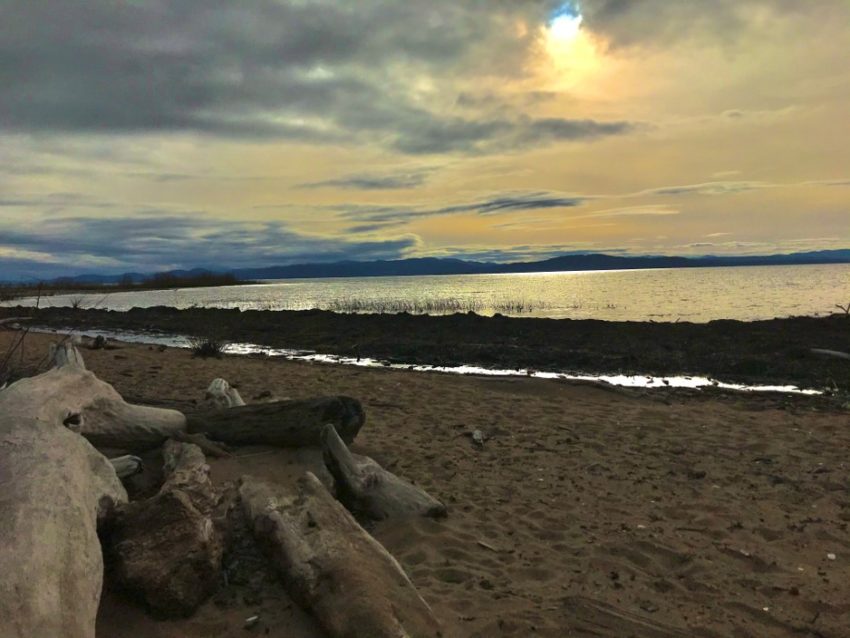 A recent Sunday afternoon found the Burlington bike path brimming with people all staggered by a somewhat unnatural distance even as the rain fell steadily for hours. Walkers strolled in fluorescent weather-proof jackets, enjoying the rainy path alone, in pairs or with a dog.

Almost as many signs are now scattered across the waterfront to provide an example of what correct social distancing looks like. Burlington Parks and Recreation have put up about 150 signs reminding the public to keep six feet of distance between groups.

For the most part, people were doing their best to balance getting in some outside activity while following public health guidelines to keep apart in order to help slow the spread of the COVID-19 virus, but now, as parks and even the bike path experience overcrowding, Burlington along with many surrounding towns have temporarily closed down facilities such as playgrounds, basketball and tennis courts, fitness stations and dog parks.

In the April 2 update from the city, Director of Burlington Parks and Recreation Cindi Wight clarifies what the parks can still be used for.

“Walking, running, biking, resting and any other solo activities that do not require shared equipment are all things you can do,” Wight said. “You can take a rest. If you are a senior and you need to stop and rest, you can take that contemplative moment in our parks… Group gatherings, use of park shelters, or any other activity that cannot be done while maintaining six feet of social distance are no longer permitted.”

Outside of Burlington, popular local and state parks have seen increased demand with more people working from home and looking for places to get fresh air and exercise.

Vermont State Parks posted a social media reminder that although facilities are not staffed and open for the season, the public could use park trails. Soon afterward, however, the ever-popular Mt. Philo State Park in Charlotte experienced overflow parking and summerlike crowds in late March.

On its website, Vermont State Parks offers tips that suggest Vermonters stay closer to home rather than seek out popular spots.  It also reminds people to only recreate outside if they’re healthy.

The Green Mountain Club also urges Vermonters to seek out quiet spots close to home rather than heading to popular recreation areas such as the Long Trail.

“We recommend taking walks right out your door and exploring your neighborhood on any trails, dirt roads, or sidewalks you have available. Trails and parks in other states have been overwhelmed with use and had to close because people were not practicing correct social distancing,” the club wrote in a March 25 update.

Local parks and recreation officials are putting out a similar message.

Hinesburg Director of Parks and Recreation Jennifer McCuin confirmed on April 8 that all playgrounds in the state have been closed, including the play area at Hinesburg Community School. And while more spacious recreation areas with fields and trails are still accessible to the public,  McCuin urges local residents to refrain from visiting parks.

“It’s not wise to encourage people to visit parks. The more people that are willing to adhere to staying home and leaving for essentials, the sooner we can flatten the curve and have a chance at getting more people through this pandemic,” McCuin said.

Those wanting some fresh air and exercise should choose their spots wisely with a goal of finding open spaces away from other people or where it is easy to stay six feet or more apart from others, McCuin said.

“Hinesburg is fortunate to have many dirt roads allowing an option to walk, run or ride a bike while getting some physical activity and maintaining appropriate social distance,” McCuin said.

In Shelburne, Director of Parks and Recreation Betsy Cieplicki stated that town parks and trails remained available, but closures may be necessary if people don’t abide by distancing guidelines.

“We are hoping to keep [parks and trails] open and available for valuable outdoor healthy recreation opportunities during this stressful time,” Cieplicki said. “But it is difficult to monitor and ensure people are following the safe practices. Head outdoors for a walk or bike ride with your household family members for company, but please refrain from meet-ups in the parks.”

Elsewhere in Shelburne, The Nature Conservancy of Vermont has closed its natural areas to the public, including Shelburne Pond and Laplatte River Marsh. At Shelburne Farms, programs are canceled but walking trails remain open to the public with guidelines posted reminding visitors to maintain appropriate distance.

Charlotte is taking a similar approach. Director of Recreation Nicole Conley said that while the Charlotte trails remain open, social distancing guidelines must be followed.

“Based on the ‘stay at home order’ the facilities at the beach are not being sanitized or monitored to enforce single household gatherings and social distancing,” Conley said. “The town has trails and dirt roads available for daily exercise. If you choose to bring your dog we ask that you have them under control at all times and clean up after them.”

State Deputy Commissioner of Health Tracy Dolam urges Vermonters to respect the limitations our society faces while embracing healthy changes to their routines.

“Before anything else, we want to encourage everyone to wash their hands on a regular basis, it’s the most effective way to stop transmission. Absolutely avoid contact with anyone unless it’s essential,” Dolam said.

“But get outside and exercise. Branch out farther, maybe go a little earlier or later in the day to avoid crowds. Vermont is big. For your mental health, it can have a very calming effect and bring down the anxiety that a lot of people are feeling right now.”

“One thing to know is if there’s anyone else with you, you want to supervise them. Six feet apart is not natural for a child, so you, as an adult, have to be more cautious of your kids to make sure they really understand it. Have your eyes on them,” she said.

The Vermont Department of Health has received hundreds of calls since Gov. Phil Scott released “Stay home, stay safe,” an order requiring Vermonters to stay home, on March 25. While the order forbids non-essential outings, it still allows Vermonters to enjoy exercise outdoors. The order is ongoing and will be in effect until at least April 15. In his press briefing April 8, Gov. Scott said he expected to announce an extension of the order as soon as Friday, April 10.

“I think a lot of people have questions about it, and it can feel like the government will come knocking on your door, but it’s really about minimizing contact,” Dolam said. “What we’re doing now is going to help our community’s transmission not become as widespread as other parts of the country.”