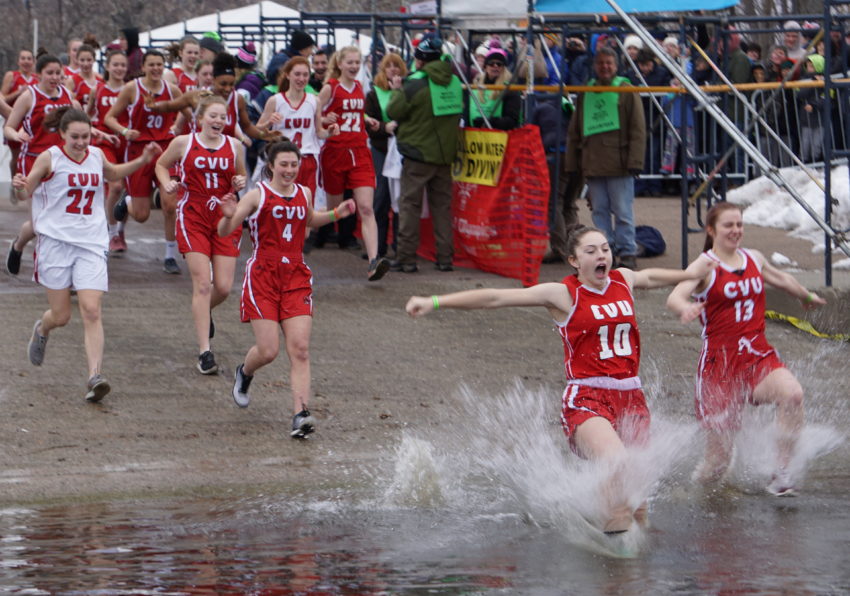 On Saturday, Feb. 1, Vermont Special Olympics held its 25th annual Penguin Plunge on the Burlington waterfront. The largest school group to take part in the event were 155 students and staff from Champlain Valley Union High School, including the entire 26-member girls basketball team (pictured). Together, they raised $34,990.

Peter Booth, the CVU staff member who organizes the school’s penguins for the vent was the top individual fundraiser with contributions of $4,621.

This was the eighth year CVU participated as a school and the eighth time the school won the event’s  “Cool Schools Champion” honor. At the CVU Winter Carnival this Friday, Special Olympics will present the school with a trophy, Booth said.

The plunge happened shortly after a group of Danish exchange students arrived at CVU. Booth said seven or eight of them along with their host students and chaperones took part. “I know that being a part of our group and experiencing all the school/community spirit on that day has been a real memory maker for the Danish kids,” Booth said.

Other teams from the Champlain Valley School District included 30 plungers from Hinesburg Community School who raised $8,093.

The event overall drew 1,197 participants and raised $610,000. The nonprofit’s mission is to support those with intellectual disabilities by promoting inclusion through sporting competitions.

The fundraisers from the school teams are still open online and accepting contributions online through the end of February at tinyurl.com/findpenguinplungers.