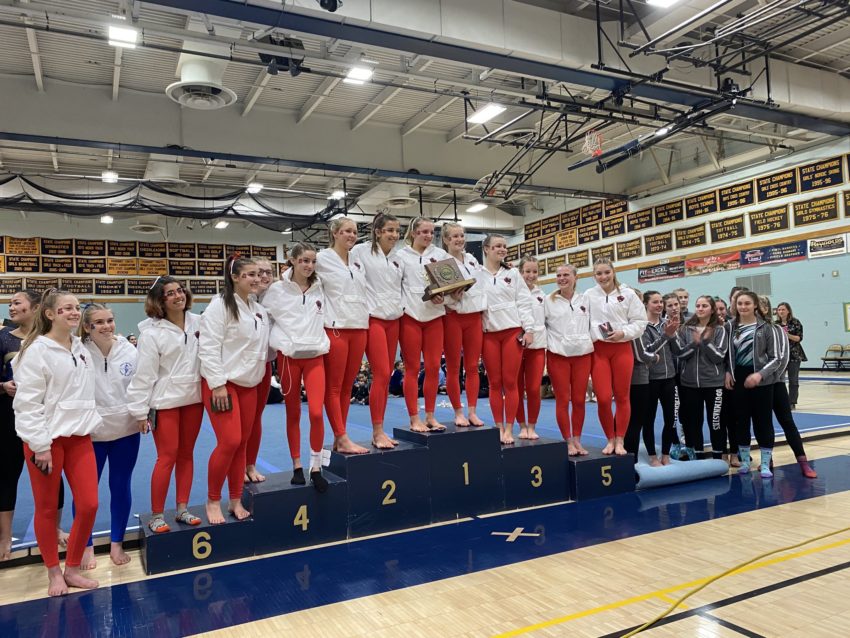 In her final floor exercise of her high school career, senior Tali Giubardo won with the day’s best score, 9.625. She was the all-around champion, and led CVU to win the crown – earning the Redhakws their second championship victory in three seasons.

Coach Madison Bourdeau told the Burlington Free Press that her Redhawks had been on a mission all season, and they all worked hard to win the championship together.

The victory was particularly sweet for Giubardo who came back this season after a year off recuperating from a spinal injury.

Playing under the shadow of a triumphant season can exasperate the growing pains of any young team, especially one comprised of more underclassmen than upperclassmen, as in the case of the CVU boys hockey team. The 2-12-2 Redhawks, however, are not discouraged by their relative inexperience.

According to head coach J.P. Benoit, working with a young squad this season has given the Redhawks substantial opportunity to build in-game experience across the depth chart and develop team confidence.

“We have been able to get almost everybody on the ice, I can throw anybody we have dressed out there and have full confidence that they are going to be able to execute whatever we need them to,” Benoit said.

It is how players compose themselves in these formative times that dictates their potential, and, through Benoit’s eyes, there is potential success on the horizon: Division I playoffs begin in early March.

“Our record tells you it should be a short run,” Benoit said, “but as we have shown in previous years, and with the coaching staff that we have, we will be ready for playoffs. I don’t think teams want to play us.”

Youthfulness appears to be a recurring theme in CVU winter sports teams, and the CVU girls hockey team, hailing in with 10 freshmen, 3 sophomores, 2 juniors and 4 seniors, has seen modest success with their newcomers. Their record is 9-8 as of Feb. 17.

Redhawks head coach Scott Bushweller entered the season with eliminating the “freshmen jitters” as a top priority. “It only took our first game for that to happen, and then they turned into confident hockey players and have improved significantly over the season.”

According to Bushweller, freshmen goalie Grace Ferguson, who entered 2019 having never played goalie, is a token example of this adaptation. Since last spring she has been receiving individual training from CVU goalie coach Scott Davidson and former UVM goalie Melissa Black, growing her skill exponentially.

“[Ferguson] is now to the point you would think she has been playing for years,” Bushweller said.

Bushweller has a hard time identifying stand-out performances from the rest of the team this season, saying “There have been so many that I cannot just list a couple or a few, which is a nice problem to have.”

Despite their immense progress since December, the Redhawks still have work to put in before playoffs start in March.

“One area we identified at the beginning of the season we needed to significantly improve is getting off good quality hard shots,” Bushweller said, “Through off ice strength training and working on shooting in practices the girls have significantly improved, which has led to more goals.”

This offensive prowess, and a first year goalie that plays like veteran, will no doubt help CVU’s run in the post-season.

Throughout their season, the CVU girls basketball team’s mantra on the court has been cautious intensity. A staunch 15-0 record, with a handful of landslide victories by more than 20 points, reveals that their execution of it has been quite effective.

“We always say we play fast, but not reckless,” head coach Ute Otley confessed in our interview, “[Our players] transition quickly from defense to offense; they run the break with some real intensity. Teams can’t rest getting back against us.”

As the Redhawks approach the end of an exhausting regular season, veteran players have been called on to ensure this intensity does not wane.

An abnormally close game against Essex on Feb. 11 saw CVU tied 42-42 in the third quarter, but a fourth quarter rally from senior guard Mekkena Boyd and junior guard Catherine Gilwee secured a 63-46 win.

Both guards broke their career records for points per game, with 23 for Boyd and 19 for Gilwee, and restored team confidence in the process.

“They executed perfectly and put the game away just like that,”Otley said. “It’s really easy to get complacent when your winning games by 35-40 points on a regular basis.”

With playoffs quickly approaching, Otley is focusing on strengthening the team’s depth and reinvigorating their tactics, stating: “We have to have more variety available in our defensive arsenal, we can’t just solely rely on our man-to-man defense. Being creative as you go into the playoffs is pretty important.”

A recent dip in form should not distract from the CVU boys basketball team’s largely dominant season.

Despite losing several key starters to injuries, including senior guard Jacob Boliba, the team is 12-4 and sits at second place in the Division I standings.

Assistant Coach Matt Saltus recognizes the lessons that their three game losing streak can offer and hopes the team meets them with determination.

“Each of these games had moments in which we could have won or taken more control, and this has both disappointed us, but also increased our resolve to continue to improve our skills, teamwork, and game plans,” Saltus said.

Aside from overcoming the season’s injury struggles, the Redhawks have displayed their ability to meet adversity with resolution in gametime situations. Saltus attributes that to a composed team mentality that was exhibited in a tough 76-55 win against Rice earlier in the season.

“We began to realize as coaches,” Saltus said,” that this team was not prone to broad emotional swings. They didn’t get too crazily excited when things were going well, and didn’t hang their heads when the game was not going their way.”

The Redhawks are going to have to keep that composure as they look to advance further in the Division I playoffs than they did last year, which despite overwhelming regular season success, was marred by an upset in the first round.

Saltus and the rest of the CVU coaching staff is doing what they can to ensure that does not happen again.

“Right now we are focusing on finishing — finishing a play, a quarter, a half, a game. Players first need repetition and success in practice in order to have the confidence and teamwork to finish in games.”

The CVU Wrestling team is a stone’s throw away from the Feb. 29 state championships, and at 5-5 in dual competitions this season, their chemistry and resilience has thoroughly impressed Head Coach Gunnar Olson.

“Team successes this season have definitely been in the “buy in” with the athletes and their families. There’s more enthusiasm now than there was in early December,” Olson said.

Similar to the CVU hockey teams, the wrestling team is also adapting to a roster full of fresh faces. According to Olson, they have grown into the sport with quick haste.

“Being a team with nine freshmen and several other first season wrestlers, they’ve picked up the sport remarkably well by learning from the veterans. Team spirit is far stronger than I expected at this time of year,” Olson claimed.

One standout wrestler, junior Will Murphy, is especially poised for a run at the championship title, sitting at number one in the all-state rankings as the team approaches the postseason. In addition to his leadership, Olson has also noted contributions from captains Matt Trifaro and Riley Brown in serving as role models for the underclassmen.

On Jan. 28, freshman Esther Cuneo came in first place for CVU at the Sleepy Hollow classic.

Two weeks later on Feb. 15, Emma Crum snubbed a second place win for CVU at the Har’dack race. The 2020 state meet was to take place on Feb. 20 and 24 as the Hinesburg Record went to press.

The U16 Championship – a premier championship event for cross-country skiers under 16 years of age – will take place on March 6-8 at the Mountaintop Resort in Chittenden, VT.

The Eastern High School Championship, which is the most competitive event of the season, is schediled for March 13-15. Only 24 boys and 24 girls from each state (Vermont, Maine, New Hampshire, New York, Massachusetts) are awarded a chance to compete.

CVU Alpine skiing has had an excellent season, led by Olivia Zubarik, who had a first place finish in the giant slalom race at the Essex Carnival on Jan. 31 and Feb. 1.

Her first place helped the CVU team to a top finish. The team had its final race on Feb. 13 at Burke Mountain.